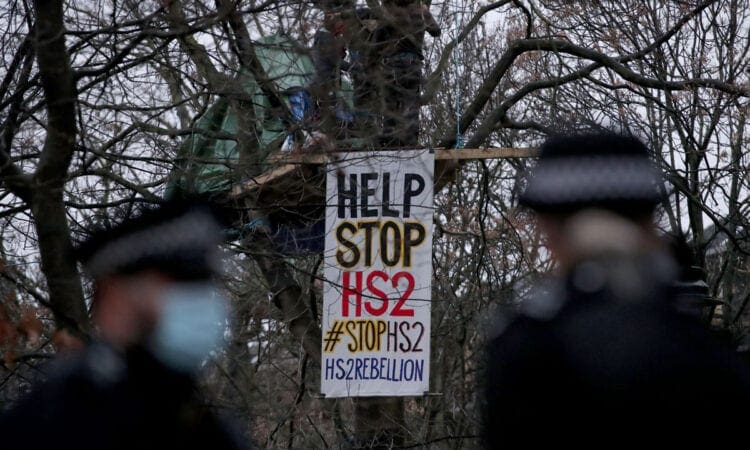 Protesters campaigning against the HS2 rail project have dug and are ready to occupy a 100ft tunnel network near Euston station – in a bid to prevent eviction from a protest camp.

Members of HS2 Rebellion claim Euston Square Gardens, a green space outside Euston station, will be built over with a temporary taxi rank before being sold to developers.

A group of protesters are prepared to occupy the tunnels, dug “in secret” over the last few months, and stay underground “for as long as it takes to stop HS2”.

A spokeswoman for HS2 Ltd said it could not comment on the specifics of protesters’ activities as it was yet to take possession of the land, but said “illegal” actions could be a danger to people’s safety.

A community notification issued in December detailed the need to build an “interim” taxi rank on the east side of Euston Square Gardens to support the construction of a proposed HS2 station.

Construction work is due to begin this month and continue until December.

Tunnellers have worked “around the clock” using pickaxes, shovels and buckets to create the network, code-named Calvin, HS2 Rebellion said.

With the help of local residents, spoil from digging has been used to “fortify the barricades” at the network’s entrance and insulate the “pallet fortress” to keep tunnellers warm as they sleep between shifts.

Tunnels are supported by wooden joists and thick boards to prevent collapse and inside there are stashes of food and water, protesters said.

HS2 Rebellion said it expected protesters to be evicted from the site from Wednesday morning.

It added: “They believe they can hold out in the tunnel for several weeks and hope in this time that a court will rule against HS2 for breaking the law by attempting an eviction without a court order and during the national coronavirus lockdown.”

The group said lawyers for the “Euston Square Gardens Protection Camp” had written to HS2 “advising them of the illegality of any such eviction attempt at this time”.

HS2 Rebellion claims that the planned HS2 line, due to link up London, the Midlands, the North of England and Scotland, will see 108 ancient woodlands “destroyed” and “countless people being forced from the homes and businesses”.

HS2 Ltd said only 43 ancient woodlands would be affected by the railway’s route between London and Crewe, with 80% of their total area remaining intact.

HS2 Rebellion called on the Government to scrap the “expensive, unpopular and destructive” scheme “before it is too late” and argued for a National Citizens Assembly to “lead the way out of the climate and ecological emergency”.

One protester, Blue Sanford, 18, from London, said: “I’m angry that the Government is still effectively ignoring this crisis despite declaring a climate and ecological emergency two years ago.

“I’m in this tunnel because they are irresponsibly putting my life at risk from the climate and ecological emergency.

“They are behaving in a way that is so reckless and unsafe that I don’t feel they are giving us any option but to protest in this way to help save our own lives and the lives of all the people round the world.”

Construction work started in September on Phase 1 of HS2 from London to Birmingham.

The Government-commissioned Oakervee Review considered a cost estimate for the project by an external consultant that put its final bill at £106.6 billion in fourth quarter of 2015 prices.

The review commissioned a comparative analysis of this estimate and those by HS2 Ltd and said characteristics of major rail infrastructure cost plans, according to evidence from Network Rail, were “not evident” in the external estimate.

Despite it running tens of billions of pounds over budget and several years behind schedule, Prime Minister Boris Johnson gave the green light for the railway in February 2020.

The spokeswoman for HS2 Ltd said: “Illegal action such as this is costly to the taxpayer and a danger to the safety of the activists, HS2 staff, High Court enforcement officers and the general public, as well as putting unnecessary strain on the emergency services during the pandemic.

“Safety is our first priority when taking possession of land and removing illegal encampments.”

She said HS2 provided “a cleaner, greener way to travel, helping to cut the number of cars and lorries on our roads, reduce demand for domestic flights, and help the country to cut its carbon emissions in the fight against climate change”.

The spokeswoman said HS2 had been approved by MPs on “multiple occasions”, would support Britain’s economic recovery and was supporting thousands of jobs.