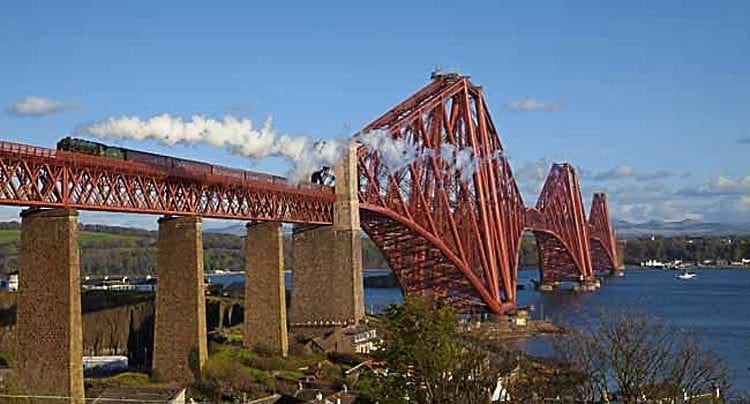 SRPS Railtours is organising steam specials on each Sunday in August 2019, starting at Linlithgow, and picking up passengers at Dunfermline, Kirkcaldy, Dalgety Bay and Edinburgh Waverley.

The trains will set down at Galashiels and terminate at Tweedbank (approx 12.50).

The return departure at about 15.10 will be diesel-hauled to Newcraighall and then steam-hauled for the remainder of the journey through Edinburgh and round the Fife Circle, calling at the same stations as on the outward journey.

The total length of the return journey is 197 miles, of which only 31 miles is not steam-hauled.

Off -train excursions are available, including visits to Abbotsford House, Melrose or St Boswells.

For further information and to book please visit www.srpsrailtours.com or phone 0131 202 1033.

The train starts from Linlithgow and crosses the Forth Bridge, which in 2015 was designated as a UNESCO World Heritage Site. The route is around the Fife Circle, calling at Dunfermline, Kirkcaldy and Dalgety Bay.

There are spectacular views across the Firth of Forth as the train passes through Kinghorn, Burntisland and Aberdour. After again crossing the bridge the train heads for Edinburgh and steams through Princes Street Gardens as it approaches Waverley station.

The train then descends along the valley of the Gala Water through Stow to Galashiels, where passengers can choose to alight. It then crosses the River Tweed before reaching the end of the line at Tweedbank.

The return will be diesel-hauled from Tweedbank to Newcraighall, where the train will be turned on the Niddrie triangle so that it is steam-hauled for the remainder of the return journey through Edinburgh and Fife to Linlithgow.

Latest ‘Railtours’ on The Railway Hub

The Locomotives and Train

The train will be hauled by a ‘5MT’ 4-6-0 steam locomotive ,which is owned by Ian Riley and based at the East Lancashire Railway. The Black Five locomotive was designed by Sir William Stanier for the London, Midland & Scottish Railway, with a total of 842 built between 1934 and 1951.

The coaches are owned by the Scottish Railway Preservation Society and maintained by volunteer members. All are former British Rail coaches built in the early-1960s.

The trains will be operated by West Coast Railways, and one of their Class 37 diesel locomotives will haul the train back from Tweedbank to Newcraighall, where the train will reverse.