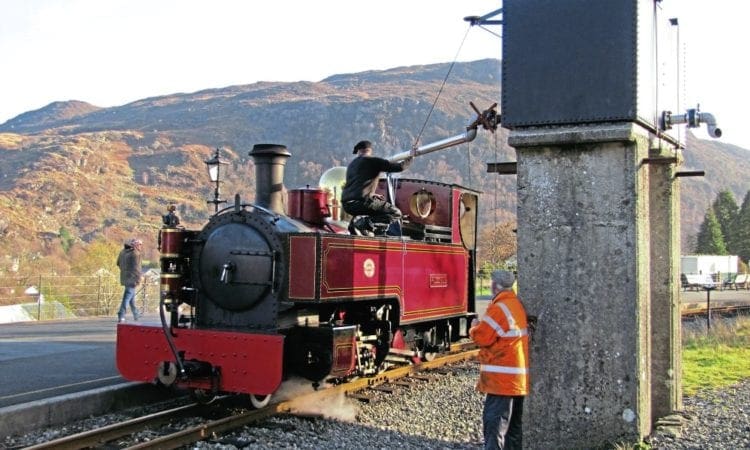 The Welsh Highland Heritage Railway’s (WHHR) Hunslet 2-6-2T Russell made an historic trip from its Gelert’s Farm base onto Welsh Highland Railway (WHR) metals to steam to Beddgelert on November 25.

This was the first time Russell had steamed over the Porthmadog to Beddgelert section of WHR since 1937.

Russell hauled replica North Wales Narrow Gauge Railway carriage No. 9 (or 25) and WHHR’s ex-Vale of Rheidol brakevan, with the train constituting a gauging and inspection operation under the auspices of WHHR and Festiniog & Welsh Highland Railway (F&WHR) engineering and operating staff.

It was the longest trip undertaken by Russell since its £350,000 overhaul completed in 2014, which reinstated various as-built features.

Significantly, the operation heralded an announcement Russell will participate in a Welsh Highland Heritage weekend on June 21-23. The 1906-built loco will work between WHHR’s replica 1920s WHR halt at Pen-y-Mount over the WHR to Hafod-y-Llyn via Pont Croesor. This event is expected to feature other visiting locos.

Russell previously ran on WHR track in 2000 when it worked with Ffestiniog Railway’s Single-Fairlie Taliesin between Caernarfon and Waunfawr.

A Welsh Highland Heritage loco last ran on the WHR on December 29, 2012 when Bagnall 0-4-2T Gelert worked a test train to Beddgelert. This operation followed trials during 2011, but anticipated further workings did not materialise.

Many had hoped Russell would appear during last June’s Hunslet 125 event, and it is understood the loco was invited to participate in the September 14-16 WHR SuperPower gala, but neither visit occurred.