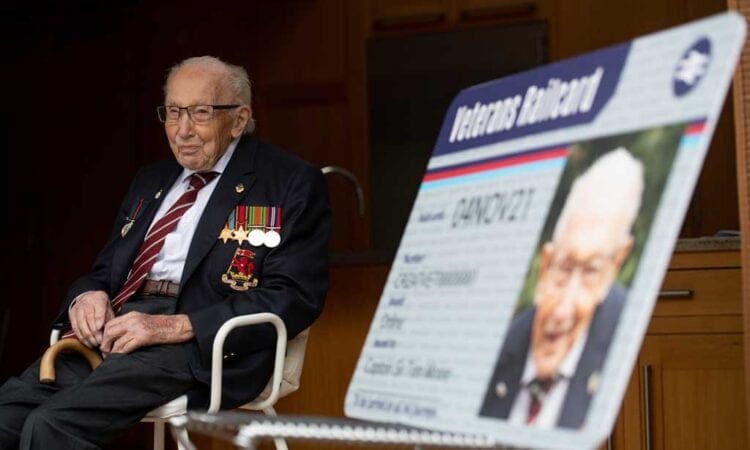 Captain Sir Tom Moore has died in hospital at the age of 100 after testing positive for COVID-19.

The veteran, who raised more than £29 million for NHS Charities Together to mark his 100th birthday, died in Bedford Hospital on Tuesday morning.

After raising so much money for the NHS, the Captain had a Great Western Railway (GWR) Intercity train named in his honour.

Five-car 800025 was named Captain Tom Moore on his 100th birthday in April. The naming followed requests from GWR staff and the general public.

GB Railfreight also thanked Captain Tom Moore for his fundraising efforts for the NHS with a birthday surprise – a freight locomotive named in his honour.

The name plates were produced by Procast, one of which has been kindly donated by Neil Booth, Director of Railwayana Auctions UK Ltd, as a thank you for Captain Moore’s amazing efforts.

The name plate now adorns the locomotive, which was unveiled by GB Railfreight Managing Director John Smith, with Captain Moore watching the ceremony from home.

“It is with great sadness that we announce the death of our dear father, Captain Sir Tom Moore.

“We are so grateful that we were with him during the last hours of his life; Hannah, Benjie and Georgia by his bedside and Lucy on FaceTime. We spent hours chatting to him, reminiscing about our childhood and our wonderful mother. We shared laughter and tears together.

“The last year of our father’s life was nothing short of remarkable. He was rejuvenated and experienced things he’d only ever dreamed of.

“Whilst he’d been in so many hearts for just a short time, he was an incredible father and grandfather, and he will stay alive in our hearts forever.

“The care our father received from the NHS and carers over the last few weeks and years of his life has been extraordinary. They have been unfalteringly professional, kind and compassionate and have given us many more years with him than we ever would have imagined.

“Over the past few days our father spoke a great deal about the last 12 months and how proud he felt at being able to leave behind the growing legacy of his Foundation.

“We politely ask for privacy at this time so we can grieve quietly as a family and remember the wonderful 100 years our father had.”