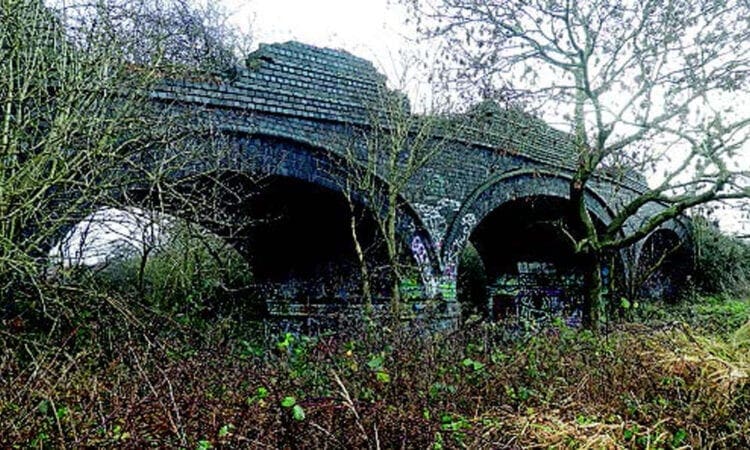 A campaign to save the ‘last’ railway structure in the Lincolnshire market town of Bourne has been gathering steam.

Bridge 234, which carried an unsurfaced country lane over the Midland & Great Northern Joint Railway (MGNJR) line from Saxby, stands in the way of a planned 373-home expansion of the town’s Elsea Park development, on which around 1500 properties have been built since 2001.

Bellway Homes wants to complete the estate with more homes, bungalows, a pedestrian greenway and open spaces. However, the bridge, currently surrounded by briars, and covered in graffiti, stands in the centre of the site.

Bellway’s plans for zone seven of Elsea Park have been submitted to South Kesteven District Council for approval.

A spokesman for Bellway Eastern Counties, told the Stamford Mercury: “Though we acknowledge Bridge 234 cannot be retained as part of our plans for the site due to its poor structural condition, we intend to create public open space as part of the development, which will enable us to celebrate the heritage of the bridge within the Bourne community.

“Our plans include the creation of a paved piazza which would mark the exact location of the bridge.

“We remain committed to working closely with the council, the Bourne History Group and the wider community to ensure we leave a lasting tribute to Bridge 234.”

The online petition is aiming for 400 signatures in a bid to preserve Bridge 234. Steven Giullari, who set up the online campaign, said: “Since the 60’s Bourne has lost its entire railway heritage. The few remaining buildings are private residences and at present a children’s nursery.

“Bridge 234 is perfectly located between the community of Bourne and that of Elsea Park. The bridge can stand as a monument to represent our lost railway heritage. The immediate area surrounding the bridge can become an area where locals and visitors alike can feel welcome and comfortable viewing this last public remnant of our golden railway age.

“Bourne was a fourway line in Victorian times. The Bourne to Saxby line which included bridge 234 was the first complete system in England to be dismantled giving it national significance.

“This is our last chance to save a piece of Bourne’s history.”