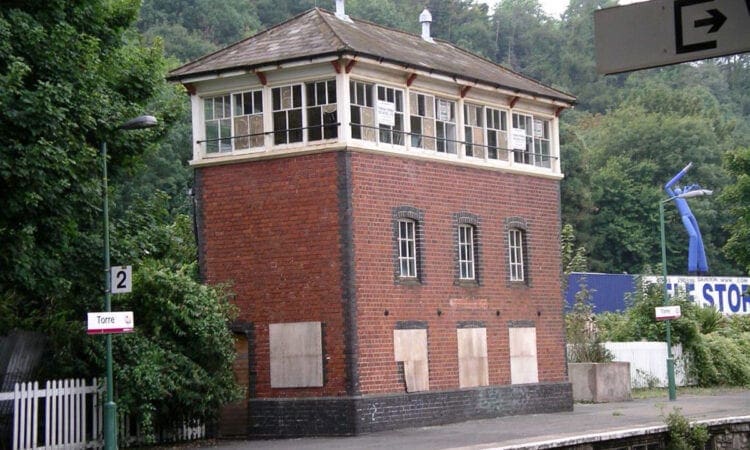 A disused Victorian railway signal box on a station platform on the English Riviera sold at auction.

The property – dating back to when the railway station opened in 1848 – listed with a guide price of £54,000 plus. Newport-based Paul Fosh Auctions ended up selling the signal box for £65,750.

Sean Roper, of Paul Fosh Auctions, said: “We had a great deal of interest from rail enthusiasts and also from local people for the former signal box which attracted a total of 41 bids from five individual bidders at the online auction.

The top floor of the property is equipped with all its now, non-functioning rows of ancient signal levers and handles and a signalman’s armchair. The signal room has a cast iron,  pot-bellied, coal fed stove dating from the age of steam, wood paneling and high ceilings and is flooded with light from the panoramic windows.

The station is still in use. Planning permission for conversion of the signal box into a holiday home has previously been obtained for the property but this has now lapsed.

Sean said: “I’d say the property would be just perfect for the avid train spotter or perhaps a holiday home owner who wants to be able to  go on a weekend away and simply step from the train and be at home. The signal box is within walking distance of Torquay’s beach and attractions. It really is a wonderful opportunity for those who prefer something a little bit different.”

Torre railway station, which has two platforms in use, is a suburban station on the Riviera Line in Torquay, Devon. The railway station is 219 miles from London Paddington.

The station is managed by Great Western Railway but is not staffed. The railway station with its ornate main buildings and intricate designed passenger footbridge was designated a world heritage site in January 1975.

The former signal box was among 78 lots listed at Paul Fosh Auctions February online sale which generated a total of £4.4m in sales.