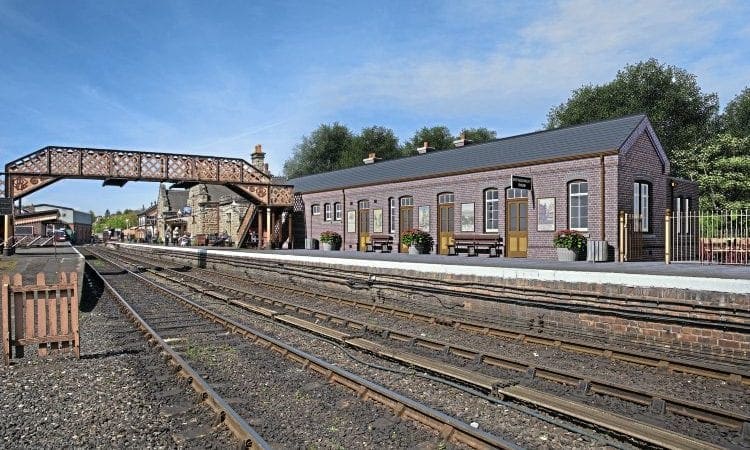 Ben Jones visits Bridgnorth to discover how the Severn Valley Railway is investing in new facilities to cope with ever-increasing visitor numbers.

Britain’s railways are busier than they’ve ever been, and our world-class heritage lines are no exception. From miniature railways to extensive standard gauge operations such as the Severn Valley Railway (SVR), more and more people are taking the opportunity to step back in time for a few hours and enjoy the delights of steam trains.

For the most popular lines that presents a huge opportunity, but also a major dilemma.

How do they cater for increasing demand while retaining the nostalgic country atmosphere that draws people there in the first place?

By their very nature, preserved railways tend to be located in country areas, on lines that were closed by British Railways because they couldn’t generate sufficient traffic to cover their running costs.

In many cases they were built to serve small towns and villages, seeing a few hundred passengers a week (at most), a few coal wagons for the local merchant and a small goods yard handling agricultural traffic, cattle and milk churns.

Very few, if any, stations on our heritage railways were built to handle the kind of crowds – and lengthy trains – we are increasingly seeing on the busiest lines.

Purists will mourn the changing character of such lines; where a small tank locomotive and two or three coaches would have sufficed in the past, closely matching what would have worked the line in the past, these are no longer able to cope with demand on ‘high days and holidays’.

On the Severn Valley, trains of seven or eight coaches have become the norm – more akin to a main line service than the GWR auto-train or diesel railcar that would have comfortably handled any traffic prior to closure. And while it’s great to see hundreds of people pouring out of a train at Bridgnorth, enjoying their day out, increasing passenger numbers present the SVR with a real headache.

It’s reasonably straightforward to add a coach or two to trains so that everyone gets a seat, but preserved railways are about much more than the trains – visitors demand facilities such as cafes, toilets, baby changing rooms and gift shops.

A nice cup of tea and a sit down is all part of the experience, but in many cases the station buildings and facilities are finding it difficult to cope. Bridgnorth station, northern terminus of the SVR is a prime example of this.

As well as being the end of the line (or the beginning, depending on where you start!), Bridgnorth is a major tourist town in its own right.

While the station’s lovely Jacobean-style building has done the job for many years, it’s no longer big enough to meet the demands of 250,000 visitors a year. As a result, the SVR is in the middle of a £2.5million fundraising scheme to improve the station’s facilities and make sure they aren’t overwhelmed.

Launched in 2016, the share offer has, impressively, already raised more than half its target total and currently stands at just over £1.5m. That has allowed work to proceed apace on a new ancillary building alongside the station facilities.

As always with preserved railways, it’s never as simple as you’d hope. The new building, which will contain new refreshment rooms, kitchen and better toilets, is being built on ground that was made up using spoil and waste material when the line was built in the 1860s.

It’s not the most stable foundation, so 63 concrete piles, each one 17 metres deep, had to be driven in to support the concrete pad on which the building stands. This work alone cost £250,000.

Around that wraps a period-style GWR retaining wall, built from more than 10,000 blue engineering bricks – an impressive, and expensive, exercise in its own right.

With the foundations in place, work is well underway on the most visible part of the project – the building itself. To ensure it fits in with the 1949 ‘time capsule’ the SVR aims for at Bridgnorth, and it doesn’t overpower the original station building, enormous attention has been paid to the design and period details.

Many of the same team that built the SVR’s Kidderminster Town station in the 1980s are also involved in this latest project.

That attention to detail extends to sourcing reject bricks and ‘seconds’ to achieve the multi-coloured appearance so characteristic of GWR blue-brick structures from that period. The bricks come from a local source too, at Ketley in Shropshire.

As the original station is Grade II listed, English Heritage (EH) has been involved at every stage of the project. EH policy for extensions to listed buildings is for them to be built in a different, modern style so the new section can be easily distinguished.

However, in this case, that did not suit the SVR’s ‘time capsule’.

Bridgnorth’s new brick-built building is designed to replicate a GWR style of around 1910, slightly after the late-Victorian look achieved so successfully at ‘Kiddy’.

EH bought into the railway’s argument and did not insist on a modern building – the fact GWR-style extensions at Highley and Arley stations are now virtually invisible certainly helped the SVR’s cause.

The new building should be complete by late-2017, allowing the popular Railwayman’s Arms pub to move, temporarily, into the new refreshment rooms.

This will allow the pub to be renovated, along with much of the main building, to 1862 condition, complete with original-style open fireplaces and elegant booking hall.

Eventually, the pub will return to the main building and the new refreshment rooms will open, allowing the removal of the ugly ‘temporary’ cafe buildings that have occupied part of the station for at least 35 years!

Obtaining permission for new builds anywhere near such sites is very difficult, but the SVR has worked closely with EH to develop a plan that will, as much as possible, return the view of Pan Pudding Hill and the station alongside to how it looked in the 19th century.

Phase 2 of the Bridgnorth scheme, which will go ahead once the £2.5m target has been reached and the new building and refurbishment is complete, will see more extensive alterations made to the land below Pan Pudding Hill. These will be targeted at improving operational facilities for the railway, rather than the ‘front of house’.

The development also includes plans for a turntable at the Highley end of the locomotive shed, allowing the SVR to turn steam locomotives at both ends of the line for the first time.

The turntable itself has already been secured, from Bristol Bath Road, but the sloping site will require extensive civil engineering works to re-route an access road, support the ‘table, its pit and steam locomotives, weighing 100 tonnes or more.

The longer-term plan, not covered by the current share offer, will see a new volunteer accommodation block added at the rear of the shed on a site currently used for overflow car parking.

The block will have 53 beds, mess rooms and shower facilities, and will be built in a GWR 1939 style. It will replace the current hostel carriages, which will be removed, freeing up an extra siding, known as George’s Siding, on the shed for operational use.

The siding will give the railway extra flexibility at Bridgnorth and allow additional coaches to be added to trains on busy days.

Once complete, the works will transform Bridgnorth station and allow the Severn Valley Railway to provide a better ‘visitor experience’ than the current facilities permit without compromising the unique steam-era atmosphere of the railway.

The railway has become vital to the local economy, a factor recognised by EH, Shropshire County Council and other local stakeholders. In 2007, the year of the floods, an independent report estimated the SVR contributes £16.3m and 283 jobs to the local economy.

Even for a railway as large and busy as this, such works are expensive and time-consuming, especially where listed buildings and sensitive sites are concerned.

However, on this scale, and completed to the standard being achieved at Bridgnorth, they are proof there’s still a place for traditional skills and a real statement of confidence in the heritage sector. ■

Access to The Railway Magazine digital archive online, on your computer, tablet, and smartphone. The archive is now complete – with 122 years of back issues available, that’s 140,000 pages of your favourite rail news magazine.