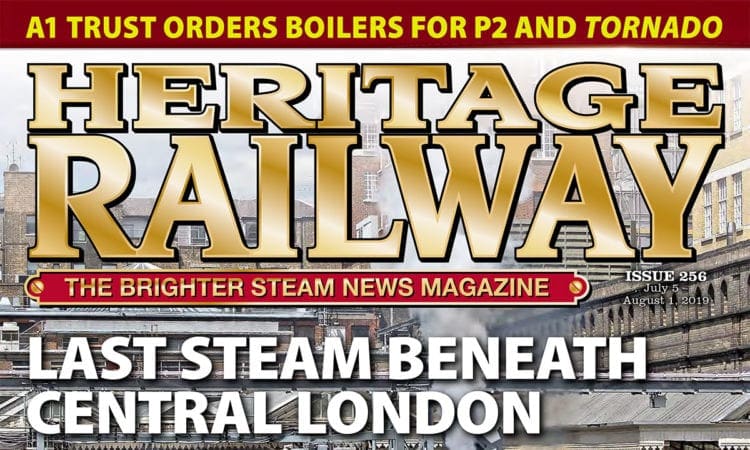 Last steam beneath Central London! Invicta flies over the rooftops! A1 Trust orders boilers for P2 and Tornado! Issue 256 of Heritage Railway magazine has got the lot!

As ever, this month’s issue is packed with the best features on our heritage railways, our Railwayana column, up and running guides, the latest news and much more!

If you’d like to read this edition of HR, then you can cut to the chase and download the digital version, order the print magazine, or better yet save those pennies and subscribe to Heritage Railway. Here’s what to expect this month…

WHERE IT ALL BEGAN | The two Vintage Trains shuttle trips from Wellington to Coalbrookdale on June 9, were billed as the last steam train on the branch line to Ironbridge. However, the railway is now at the centre of ambitious plans to turn it into one of Britain’s  premier heritage lines serving the World Heritage Site where so much of the Industrial Revolution, including the age of the steam railway, had its beginnings.

CHURSTON WORKS | The Dartmouth Steam Railway is making big strides to have more of the essential maintenance and repair work done in-house at an enlarged and modernized Churston Works, reports Roger Melton.

PLUS! All the main line news, your headlines, Platform shows off your views and check out our guide to railways running this season!

Heritage Railway magazine is on sale in UK newsagents and supermarkets, and you can buy the current issue in digital and paper formats here!

You can also buy stacks of back issues of HR, but it’s cheaper to subscribe. Subscribers save money, get their copies delivered to their doorstep and never miss an issue!

The Mystery of the Nazi Gold Train | In Training Podcast