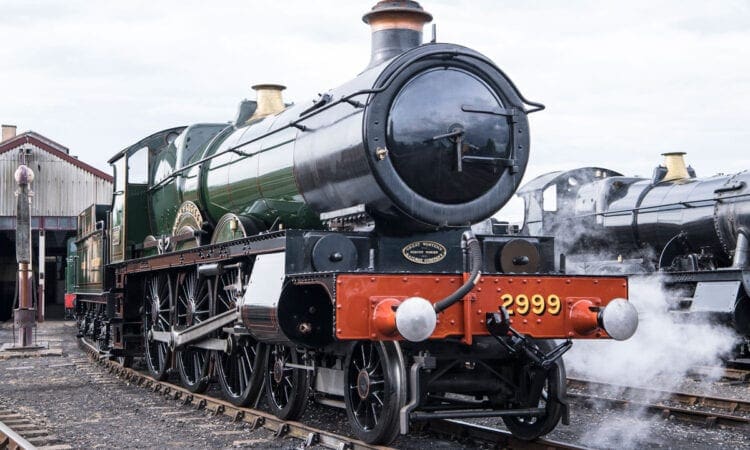 Lady of Legend to headline at SVR

The Severn Valley Railway (SVR) has announced No. 2999 Lady of Legend will be the star guest of the railway’s Spring Steam Up in April.

This unique locomotive is the only Saint class engine in existence and is set to prove a big draw to steam enthusiasts at the event, which takes place from April 15-18.

Lady of Legend was rebuilt by the Great Western Society at Didcot Railway Centre, and completed in 2019. Click here to see more.

An anti-HS2 protester who emerged from an underground tunnel after spending 19 days there has appeared in court.

Anti-HS2 activist Scott “Scotty” Breen, known as Digger Down, was arrested at the site of the protest in Euston Square Gardens just after midnight on Monday after allegedly spending nearly three weeks in one of the tunnels.

On February 18, a teenage anti-HS2 campaigner arrested after leaving the network of tunnels near Euston Station has been released on bail.

The boy, 16, was the youngest protester on the site, and became the fourth person to leave the tunnels after 22 days underground. Click here to see more.

Rail punctuality and reliability has improved, although with fewer services, according to the Office of Rail and Road (ORR).

ORR said that between October to December there were 1.7 million trains planned, 11% fewer than the same quarter in the previous year, with 74.7% arriving on time.

The report said performance remained high compared to the same period in 2019, but was lower than previous quarters in 2020. The punctuality of all 23 operators improved in the final three months of 2020 compared with a year earlier, said the report. Click here to see more.

Rail union leaders are calling for on-train revenue protection and ticket inspections to be scrapped because of COVID-19 safety concerns.

The Rail, Maritime and Transport union (RMT) said several rail operators still require staff to check tickets on trains, despite the risk of working in confined space and not being able to adhere to social distancing restrictions.

RMT said some companies, including those managed by the Welsh and Scottish governments, have suspended on-train revenue protection and ticket inspections during the current lockdown. Click here to see more.

The memorial will be a virtual event held on February 28, 2021 from 10am. If you would like to register to watch the online memorial, please click here. If you have any questions, please email greatheckanniversary@lner.co.uk. Click here to see more.

Govia Thameslink Railway (GTR) has rolled out a new ‘Live Map’ function on each of its brand websites, following a successful trial on the Southern website.

The first rail operator to launch such a feature, the maps display live data to give customers a snapshot of how the network is performing at that exact moment and highlights any disruption. Click here to see more.

CrossCountry – Train services are now able to run normally between Bristol Parkway and Newport.
Gatwick Express – Gatwick Express services remain suspended until further notice. Southern and Thameslink are still running to and from Gatwick Airport, and will provide journey options to both London and Brighton.
Grand Central – From Saturday 9 January until Sunday 28 February, Grand Central service will be suspended, as a result of the national restrictions that are in place. You can find more information here.

Great Western Railway – The railway line has now reopened between Bristol Parkway and Newport following an engineering problem that occurred earlier this month on a bridge near Patchway.
Hull Trains – The latest timetable can be downloaded here.

To help stop the potential spread of coronavirus, the UK, Scottish and Welsh governments have decided that the wearing of face coverings when travelling by train or other public transport is compulsory in all parts of Britain. So, if you travel by train, make sure you bring a face covering to wear.

No service between Romford and Upminster while we fix a faulty train at Romford. London Overground tickets are being accepted on London Underground via any reasonable route.

Until Friday 26 February, late evening weekday trains at 2303 2333 and 0048 from Liverpool Street to Chingford will not run due to staff shortage.

As part of our ongoing investment to upgrade existing infrastructure, essential works will be taking place from 20:30 on Saturday 20 February until the end of service on Sunday 21 February.

National lockdown: Stay at home. Only use public transport for essential purposes. Avoid travelling at busier times if you can, wear a face covering (unless exempt), open train windows to help with ventilation, stay apart from others and wash or sanitise your hands frequently.

Stay at home and avoid travel, except for work, education, or other legally permitted reasons.

We are currently working towards reintroducing passenger services on a line-by-line basis this morning with the aim of running our timetabled service from approximately midday. Services may be subject to delay and passengers are advised to continue checking @merseyrail on Twitter and the website before they travel.

Due to the ongoing impact of the Coronavirus pandemic we are having to make short notice changes to our services.