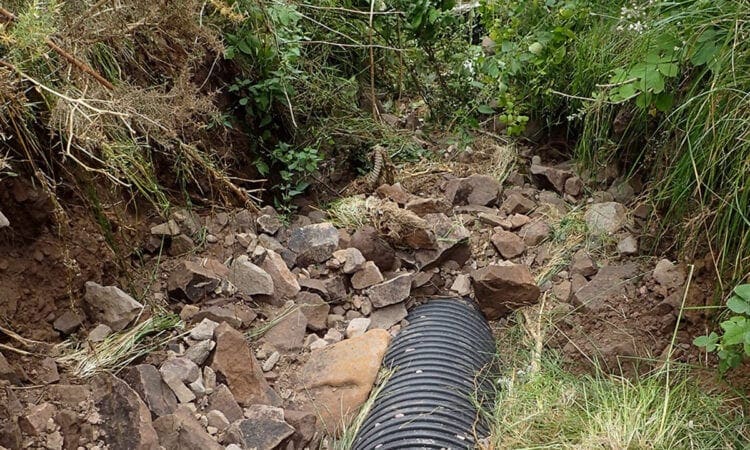 An investigation into the Stonehaven rail crash is focusing on the “lack of an effective drainage inspection regime”.

The Rail Accident Investigation Branch (RAIB) said there is “no evidence” a drainage system involved in the fatal accident in Aberdeenshire had been fully inspected since its construction in 2012. Read the full interim report.

Three people died when a ScotRail train derailed after hitting stones washed onto the track from the drain on August 12 last year following heavy rain. Six other people were injured.

A slope next to the crash site already had a “history of landslips and rockfalls” including an incident in 1915 which also led to a derailment, the Rail Accident Investigation Branch (RAIB) said in a preliminary report.

This led to Network Rail commissioning Carillion Construction Ltd – which has since collapsed – to design and construct a new drainage system.

The work was completed in 2012, but only the section closest to the track was listed on Network Rail’s drain maintenance database.

The RAIB said it has found “no evidence” the drain was inspected before the crash, apart from the section closest to the track.

It added that the design and construction of the drain, plus the “intended and actual” inspection processes, are among the main areas it considered as part of its investigation.

The report said there was “near-continuous heavy rain” in the area between around 5.50am and 9am on the day of the crash, which caused “significant flooding”.

The 51.5mm of rain that fell in this period was almost 75% of the monthly total in Aberdeenshire in an average August.

But it was “dry and sunny” when the derailment happened at 9.37am.

The 6.38am service from Aberdeen to Glasgow was returning towards Aberdeen at the time of the accident due to the railway being blocked.

The train’s power car and one of its four carriages fell down an embankment.

All sections of the train suffered extensive damage, leading to the deaths of driver Brett McCullough, 45, conductor Donald Dinnie, 58, and passenger Christopher Stuchbury, 62.

Julie Clark-Spence, a partner at law firm Balfour+Manson, which is representing Mr Dinnie’s family, said there is “a long way to go before any conclusion is reached”.

She went on: “The interim report provides an indication that there are still many unanswered questions which need addressed quickly before there is any form of closure for them.

“Losing a loved one in these circumstances is devastating, but not knowing the full extent of what happened merely prolongs the agony for the family.”

Kevin Lindsay, Scotland organiser for train drivers’ union Aslef, said: “Blame for the accident has been laid firmly at the door of Network Rail for failing to maintain the area around the track.

“It was the landslip – the debris washed onto the track – which caused the train to derail, with the subsequent loss of life, injuries, and catastrophic consequences.

“We are urging Network Rail to examine every mile of track for which it is responsible, to ensure something like this can never happen again.”

Transport Secretary Grant Shapps said the RAIB has been conducting “extensive work” during its investigation, adding: “I look forward to receiving the full findings in due course, to ensure lessons are learned from this tragedy.”