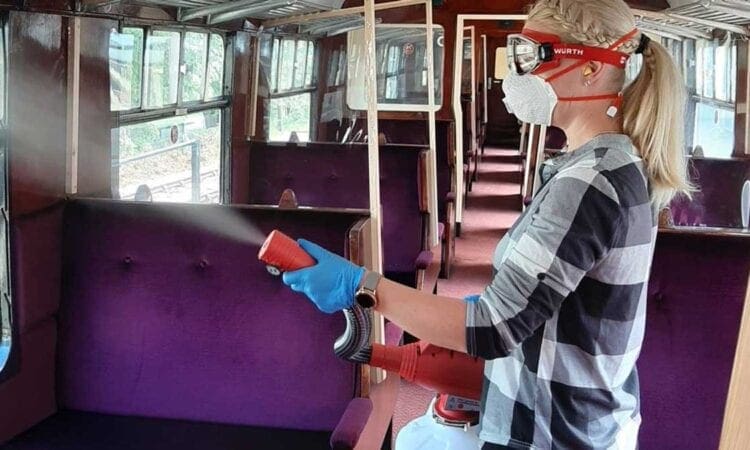 The Dartmouth Steam Railway were the big winners at the 2021 Heritage Railway Association (HRA) awards – which were hosted virtually due to COVID-19.

The HRA Awards recognise a wide range of achievements and distinctions across the entire heritage railway industry, and the awards acknowledge individuals and institutions as well as railways, tramways and cliff railways. In spite of the overwhelming impact of the COVID-19 pandemic, several categories saw a record number of submissions and shortlisted entrants.

The Lord Faulkner Award for the Young Volunteer of the Year recognises the crucial importance of succession generations in securing the future of heritage rail, and acknowledges a distinguished contribution made by one or more young volunteers, under the age of 26. The winner was Oliver Edwards, of the Welshpool & Llanfair Light Railway. Runners-up were the Severn Valley Railway’s Tom Mills and Michael Abbott, from the Somerset & Dorset Railway Heritage Trust.

The runners-up were the Didcot Railway Centre, for their marketing communications; Swanage Railway’s ‘Save Our Service’ film-makers; the Ffestiniog & Welsh Highland Railway’s media and communications department, and the Ravenglass and Eskdale Railway Preservation Society’s 60-year celebration book ‘It’s Still a Lot of Fun!’.

In the Internal Communications category, the award was taken by the Talyllyn Railway, for their Control Centre public on-line subscription service. Close behind as runners-up were the Midland and Great Northern Joint Railway Society, for their Summer/Autumn issue of ‘Joint Line’; the Great

Western Society for the Great Western Echo magazine; Bluebell Railway for The Bluebell Times, and the Welshpool & Llanfair Light Railway for ‘The Earl’ communication to working members.

In spite of pandemic restrictions, the UK heritage rail sector has taken every opportunity, however limited, to engage and enthuse the paying public, and competition in the Outstanding Visitor Attraction category was strong. The Dartmouth Steam Railway took the trophy, placing the Lynton & Lynmouth Cliff Railway, Didcot Railway Centre, the Seaton Tramway and the Statfold Barn Railway as runners-up.

The Coiley Award is presented to an HRA member who has completed an outstanding engineering project in the field of locomotive overhaul, restoration or preservation. Top honour for 2021 went to the Ffestiniog & Welsh Highland Railway for their restoration of the Large England locomotive Welsh Pony, with the Lincolnshire Coast Light Railway’s Skeggy Simplex, and the Tanfield Railway’s 1904 Andrew Barclay Horden as runners-up.

The HRA Award for Small Groups drew a record six nominations, with the trophy going to the Downs Light Railway Trust for their achievements with youth engagement. Runners-up were Southern Electric Traction Group CIC, for 4VEP No 3417, Hull and Barnsley Railway Stock Fund, for their move to Hull College; Tarka Valley Railway CIO for Steaming Ahead, the Bahamas Locomotive Society for Steve Allsop’s 50 years’ service, East Somerset Railway for their platform, museum and outreach project, and Great Central Railway for the Quorn Wagon and Wagon Group.

The HRA Annual Award (Large Groups) was won by the Lynton & Lynmouth Cliff Railway, for their Top Wheel installation. The Isle of Wight Steam Railway platform teams, the Swanage Railway’s social media team, and the Dartmouth Stream Railway & Riverboat Company were the runners-up.

The last HRA award of the show was the new Diesel Locomotion Award, where top-of-the-podium place went to the Class 50 Alliance, for 30 years of Class 50 preservation excellence, closely followed by the Mid Suffolk Light Railway, for their Shredded Wheat locomotive, and the Lincolnshire Coast Light Railway for their Skeggy Simplex as runners-up.

Steve Oates, HRA chief executive, said: “There was a point where we weren’t sure we could have an awards event for 2021. Then there was a point when we wondered whether members, rightly so preoccupied with lockdown issues, would have any enthusiasm for participating. I’m happy to say we were delighted by the huge positive response we saw, with record numbers of entries in several categories.”

Featuring recorded interviews and location footage, the virtual show drew in a record audience for an HRA awards event.