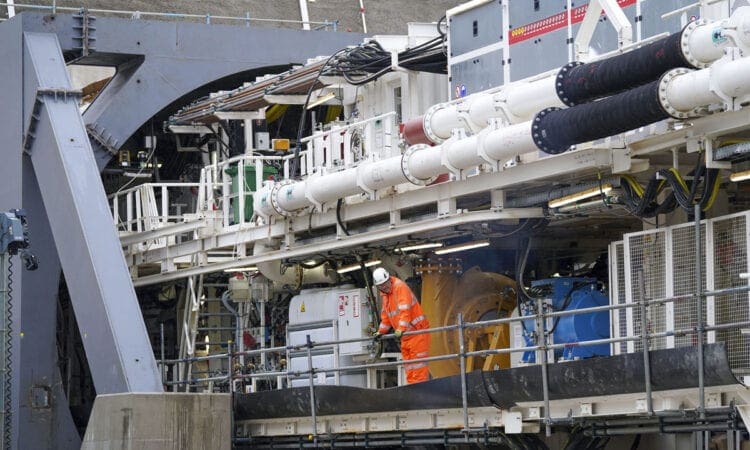 The boss of HS2 has said he hopes the UK “gets behind” the high speed rail project following the launch of its first giant tunnelling machine.

Chief executive Mark Thurston described the start of work to dig a 10-mile tunnel under the Chiltern Hills as “a major step forward”.

The 558ft (170m) long tunnel boring machine (TMB) was launched at a site in Buckinghamshire near the M25 motorway on Thursday. It will work non-stop for three years.

There is major concern about the cost and environmental impact of building the high-speed railway.

The Government-commissioned Oakervee Review warned in 2018 that the final bill could reach £106 billion (at 2019 prices) due to it running tens of billions of pounds over budget.

Meanwhile, environmental activists sprayed pink paint on to the London office of HS2 last week, in protest at the CO2 emissions created by the construction work.

In an interview, Mr Thurston said: “HS2 is a way of getting investment into the economy when we know the economy is struggling on the back of the pandemic.

“I would hope the country gets behind what is a national endeavour and takes pride in the fact that this is creating jobs for British people.”

He said: “You’ve got the Green Party in France and other countries that have championed high-speed rail.

“It seems odd that in the UK we have environmental campaigners who still do not see the benefit in a low-carbon mass infrastructure project.”

He said “cutting-edge techniques” are being used to reduce carbon emissions during construction, and claimed an electric railway is “far better than having people in cars”.

A total of 10 TBMs will be deployed between London and the West Midlands for Phase 1 of the high-speed railway.

But Tuesday’s Queen’s Speech raised fears that the eastern leg could be scrapped due to the cost of the project.

A Bill providing the powers to extend the line to Manchester was announced alongside the speech which set out the Government’s agenda, but no mention was made of the stretch to Leeds.

Asked if he could guarantee that the eastern leg will be built, Mr Stephenson replied: “We are committed to bringing the benefits of high-speed rail to the Midlands and the North.

“The sequencing of those investments is subject to the Integrated Rail Plan, and we are very much hoping to have that published as early as possible.”

The TBM launched on Thursday is named Florence after Florence Nightingale, the founder of modern nursing who spent many years in Buckinghamshire.

It will operate as a self-contained factory with a crew of 17 people working 12-hour shifts to keep it running continuously.