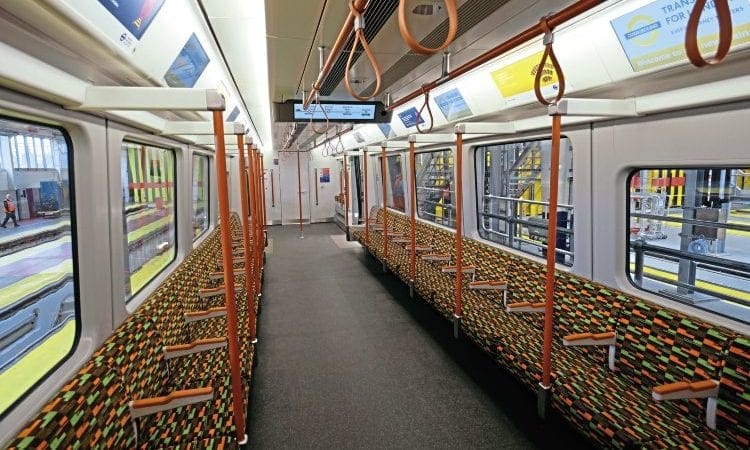 THE first of 54 Class 710 EMUs destined for service with London Overground (LO) was shown to the trade media on June 20 at Willesden depot.

The EMUs are based on Bombardier’s ‘Aventra’ platform, with Transport for London placing an order for 31 AC only four-car trains (sub-class 710/1) for the West Anglia Liverpool Street to Chingford and Romford to Upminster routes, along with 14 Class 710/2 dual-voltage (750V DC/25kV AC) for Gospel Oak to Barking services, where they will replace Class 172 DMUs.

The dual-voltage units will also run on the North and West London lines (Stratford to Richmond and Willesden to Clapham Jct).

In addition, there are a further six dual-voltage units being built as five-car sets, which will be used to provide extra capacity on the North and West London Lines, with a 10-trains-per-hour service at certain times on the NLL. The new stock will allow Class 378s to be cascaded to the East London line to strengthen services. Finally, a further three four-car sets will be built to cover services on the Barking Riverside extension, due to open in 2021.

Each sub-class has been finished in blue, white and orange and has different seating styles. The Class 710/1 has a mix of longitudinal and transverse seating, while the 710/2 is longitudinal only, allowing plenty of standing room.

Read more in the August issue of The RM – on sale now!