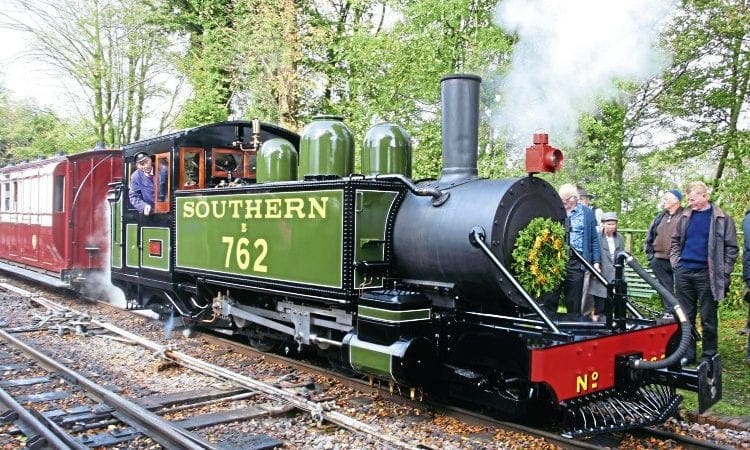 It is 82 years since the Lynton & Barnstaple Railway closed, and 38 years since a revivalist association was formed. One of its core mission statements was to restore the legendary line exactly as it was – and thanks to the culmination of a £650,000 new build locomotive project, now has a complete ‘original’ train. Mission accomplished, writes Robin Jones, with pictures by Tony Nicholson.

At its opening in May 1898, the 2ft gauge Lynton & Barnstaple Railway had a fleet of three distinctive Manning Wardle 2-6-2Ts, but was still one locomotive short.

However, the new line could not find a British supplier to build one there and then.

Between July 1897 and January 1898, many workers at UK engineering companies were striking in order to achieve an eight-hour working day, and locomotive buildings were left with a hefty backlog of unfulfilled orders.

There was a solution at hand – look across the Atlantic! The L&B directors ordered a 2-4-2T from Baldwin of Philadelphia, which drew up a unique but decidedly American outline locomotive.

Fairly soon, it was shipped as a kit of parts to Barnstaple, and was assembled at the L&B’s Pilton Works and steamed for the first time on July 23, 1898. The locomotive, often referred to as “the Yankee” by L&B staff, was, in accordance with the line’s policy, named Lyn after a local river with a three-letter name.

Five years after the Grouping of 1923, when the L&B became part of the Southern Railway, Lyn was taken to Eastleigh Works for a major overhaul, and came back in Southern green livery and carrying the number E762 on the side tanks, as well as the original nameplates on the cabsides.

Along with two of the Manning Wardles, Lyn was scrapped in 1935 when the line closed.

However, in January 2009, the Lynton & Barnstaple Railway Trust launched a project to build an advanced modern replacement Lyn. The 762 Club, a registered charity, was formed to design, construct, own and maintain it.

The visit fuelled supporters to press ahead with a ‘replica’ locomotive which the line could call its own, and a stream of components were manufactured over the years that followed.

While is every respect the new Lyn looks identical to the first one, modern ‘improvements’ were made to the design: roller bearings for the wheels, coupling and connecting rods, higher boiler pressure, welded tanks and numerous other improvements.

The final assembly from a 21st-century kit of parts was undertaken by locomotive builders Alan Keef Ltd of Ross-on-Wye, just as the imported one had been built at Pilton in late Victorian times.

The new Lyn, finished in the colours of the original as seen on its return from Eastleigh in 1929, first steamed on July 4, to be delivered by road to Woody Bay on September 11.

Minimum gauge and miniature lines apart, Lyn is also the first full-size US ‘replica’ locomotive to be built entirely in Britain – a perfect steamy cementing of the ofgten-celebrated “special relationship” between the two nations!

Exactly 82 years to the day that the original L&B closed, on September 29, the second Lyn was officially named by Sir William McAlpine at a special supporters and VIPs day attended by 400 members of the 762 Club, along with contractors and sponsors of individual components were there to see the world’s newest full-size steam locomotive launched into traffic.

Multi-millionaire enthusiast Sir William is chairman of the Railway Heritage Trust which in 2000 helped fund the restoration of the L&B’s iconic Chelfham Viaduct near Barnstaple so it is ready to carry trains again.

With the four (so far) original carriages rebuilt by L&BR Trust volunteers in Essex, the addition of Lyn has now given the 2ft gauge railway a complete heritage train.

The members’ day was followed by the line’s autumn gala weekend. Helped by extensive media coverage on local TV and press, the gala, dogged by rain for part of the weekend, nonetheless attracted more 2000 visitors, a record exceeded by L&B galas only when Lyd first came to Woody Bay in 2010 in much better weather.

I have no doubt that Lyn and its train will continue to be a major crowd puller. At the time of writing, the revivalists were waiting to hear whether the Exmoor National Park Authority will give the green light to their plans to extend the running line from the temporary halt at Killington Lane all the way to Blackmoor Gate.

Hopefully when this happens, the L&B will climb several more steps of the ladder towards the goal of becoming one of the leading tourist magnets in North Devon.

No doubt there will be more than a few visitors to Cornwall taking the scenic A39 rather than the more direct M5 and dual carriageways so they can see for themselves this new piece of Exmoor magic.

The famous wreath displayed on the railway after it closed in 18935 said “Perchance it is not dead but sleepeth.”

This line is one of the West Country’s biggest sleeping giants, and thanks to Lyn’s shrill whistle echoing through the Exmoor hills, it is now waking up fast. Many, many exciting times lie ahead.