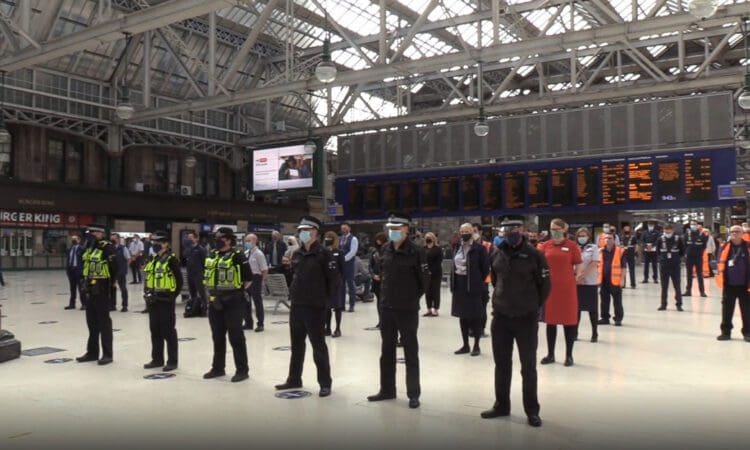 Flower beds at Stonehaven railway station have been destroyed on the first anniversary of the train derailment that killed three people.

The “deplorable act of vandalism” came just hours before a memorial plaque was unveiled at the Aberdeenshire station and a minute’s silence was held in tribute to the victims of the crash on Thursday.

British Transport Police is reviewing CCTV and Scotrail said it will work to “ensure that those responsible are brought to justice”.

Images on social media show brightly coloured flower pots in tatters and flowers strewn all over a platform at the station, with Scotrail saying the vandalism happened late on Wednesday.

Stations around the country fell silent at 9.43am, the time the derailment – which claimed three lives on August 12 last year – was first reported.

ScotRail said beforehand that all stations would observe the silence, with trains coming to a halt if safe to do so.

A wreath was laid at the platform the train left from in Aberdeen – but it is understood flowers laid in tribute were not vandalised.

Driver Brett McCullough, 45, conductor Donald Dinnie, 58, and passenger Christopher Stuchbury, 62, died when the 6.38am Aberdeen to Glasgow Queen Street train crashed into a landslide across the tracks following heavy rain.

Six other people were injured on board the train, which came off the tracks at 9.37am and would have been busier were it not for the pandemic, the rail union Aslef has said.

Network Rail’s interim report on the crash found the train “struck a pile of washed-out rock and gravel before derailing”.

The Rail Accident Investigation Branch found there had been “near-continuous heavy rain” in the area between around 5.50am and 9am on the day of the crash, which caused “significant flooding”.

The 51.5mm (2in) of rain that fell in this period was almost 75% of the monthly total in Aberdeenshire in an average August.

But it was “dry and sunny” when the derailment happened.

The train was returning towards Aberdeen at the time of the accident due to the railway being blocked.

“Today, exactly a year on, we pay tribute to Brett, Donald and Christopher, who lost their lives, and also, of course, we remember those who were injured.

“We come together as Scotland’s Railway family and we send our love and support to everyone, particularly the loved ones of the deceased, who have been affected by the tragedy.

“We will never forget.”