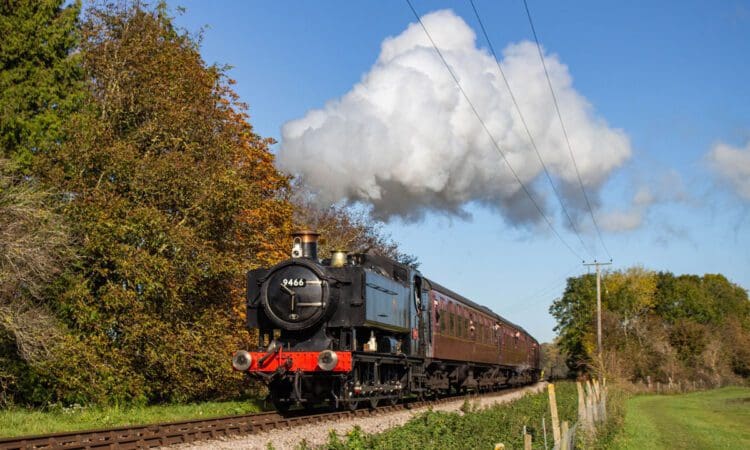 On September 16-19, ex-BR (WR) 94XX Pannier Tank No. 9466 will rub shoulders with LMS 6233 Duchess of Sutherland, as the visiting locos take centre stage, supported by an array of engines from the SVR’s home fleet.

The news comes just days after the railway announced that it will return to offering flexible tickets to passengers from September 7.

These will replace the fixed excursion tours which the SVR has been operating since restrictions were lifted. The changes will also apply to the forthcoming Steam and Diesel Galas, when visitors will be free to choose which services they travel on throughout the day.

9466, currently based at the Ecclesbourne Valley Railway, is coming to the SVR in agreement with its owner JJP Holdings. It was built in 1951, to one of the last Hawksworth designs produced for the GWR, although by then the GWR has become the Western Region under British Railways. Its main line working life lasted little more than a decade before it was withdrawn to join many other steam locos in the scrapyard at Barry.

“There are only two of its type in preservation, and this one is a regular out on the main line, hauling railtours. As well as making solo trips, it will be double-heading with our own pannier tank engine GWR 1501 and we know it’s going to be a big draw for Gala visitors.

“The fact that we’ve been able to switch to flexible day rover tickets for the Autumn Steam Gala is great news for our visitors, and we were delighted to announce the change earlier this week. To facilitate social distancing, we’ll still put a cap on the number of tickets we sell, and we strongly advise people to pre-book.”

The Gala home fleet will include 813, 1501, 7714, 34027 ‘Taw Valley’ and 75069. The railway is also running its popular overnight services on the Friday and Saturday. These will be hauled by GWR 2857, the engine which was seen alongside Hollywood actors in the recent Enola Holmes movie.

Tickets for the Autumn Steam Gala are available at www.svr.co.uk