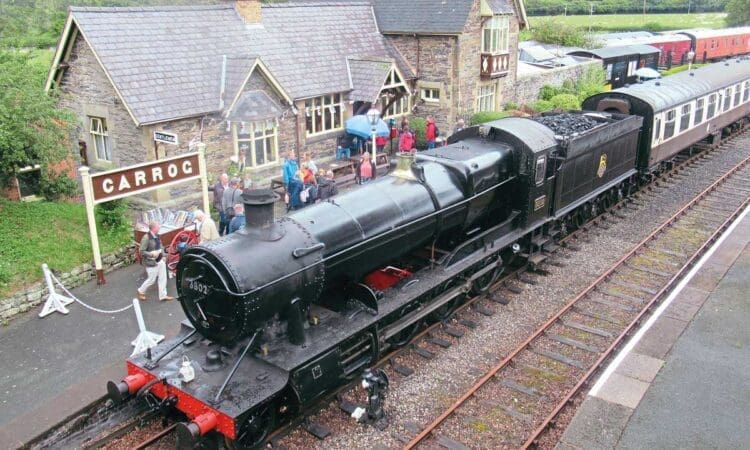 Steam services returned to the Llangollen Railway on Saturday, August 21.

The 10.30am departure from Llangollen to Carrog, headed by Nick Gilbert’s GWR Collett heavy freight 2-8-0 No. 3802, was the first steam-hauled train since October – and marked a major milestone in the recovery of the line under the Llangollen Railway Trust.

No. 3802’s certification was completed to the satisfaction of the Office of Rail and Road by members of the motive power department. The occasion doubled up as a day of reassessment of the competence of the footplate crews after a 10-month lay-off in operations.

Despite the wet weather, good numbers boarded the train for the run behind the 2884 class.
As the line began the long road back to recovery – after the railway’s plc went into administration with debts of £350,000, which led to much of its rolling stock being sold at auction – services were reintroduced in July with a diesel railcar running to Berwyn, echoing the line’s pioneering days of 1986/87, when services from Llangollen first extended across the Dee bridge.

July figures revealed that the initial service was a “modest success,” with more than 3000 assorted tickets bought for various travel options to and from Berwyn, making a useful contribution towards the railway’s overheads across 11 operating days.

Average loadings per train allowed for adequate social distancing on all services to the satisfaction of staff and passengers.

The service later extended to Glyndyfrdwy from August 13, and to Carrog on August 21.

Trust chairman Peter Edwards said: “The resumption of a steam-hauled service at Llangollen is the culmination of a huge effort by our volunteers and small team of paid staff.

“It is a significant milestone in our return to full operations. We can’t afford to be complacent, though. We are dependent on ongoing support from the Welsh Government and there are still challenges in front of us if we are to return the railway to stability and profitability.”

The Class 109 Wickham diesel multiple unit supplemented the steam-hauled train with a 75-minute interval service for the weekend.

What next for Llangollen Railway?

The railway will be without steam again from late September until October, when No. 3802 visits the Great Central Railway at Loughborough for its September 30 to October 3 autumn steam gala.

It will offer an intensive timetable, with both passenger and goods trains operating. The other guest will be BR 9F 2-10-0 No. 92134 from the North Yorkshire Moors Railway, while out of the eight rostered locomotives from the home fleet, LMS ‘Black Five’ 4-6-0 No. 45305 will be making its last gala appearance before overhaul.

No. 3802 will also be at Loughborough for the weekends either side of the gala for service trains and possible photographic charters, after which it will be taken to West Coast Railways’ Carnforth base for the rear driving wheels to be reprofiled before returning to Llangollen.