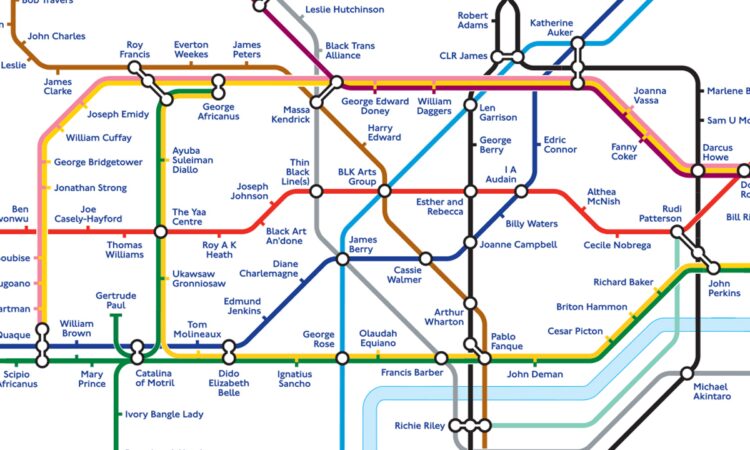 The launch of this map coincides with Black History Month and the 40th anniversary of Black Cultural Archives in Brixton, which celebrates the histories of people of African and Caribbean descent in the UK.

TfL has collaborated with Black Cultural Archives to launch the first Black History Tube map, in order to celebrate the rich and varied contribution Black people have made to London and the UK.

The reimagined map replaces station names across the Tube map with notable Black people from history, with the associated Tube lines renamed to link them together by common themes – Firsts and Trailblazers; Georgians; Sports; Arts; LGBTQ+; Physicians; Performers; Literary World and Community Organisers.

The map aims to highlight how Black people have played an intrinsic role in all parts of British life for many, many years.

The Black Cultural Archives in Brixton is the home of Black British History, conceived in 1981 as a monument to hold space for, and collect, preserve and celebrate the histories of people of African and Caribbean descent in the UK to inspire individuals, communities and society.

Some of the famous and fascinating figures from Black British history on the map include:

The unique map will be purchasable as a poster online and in person at Black Cultural Archives in Brixton and via their online shop https://blackculturalarchives.org/shop

The Mayor of London, Sadiq Khan said: “Black History is London’s history and this reimagination of the iconic Tube map celebrates the enormous contribution Black people have made, and continue to make, to the success of our city. I’m determined to create a more equal city where Black lives truly matter.

“This starts with education and that’s why this new Black History Tube Map is so important. It gives us all the chance to acknowledge, celebrate and learn about some of the incredible Black trailblazers, artists, physicians, journalists and civil rights campaigners who have made such significant contributions to life in the capital, as well as our country as a whole.”

Marcia Williams, Transport for London’s Head of Diversity, Inclusion and Talent, said: “Black people have played a significant role in all aspects of British life for thousands of years. From civil rights, art, and transport, to medicine and journalism.

“It is fantastic to see the true scale and breadth of this contribution commemorated on TfL’s iconic Tube map – a symbol so synonymous with London and the UK.”

Arike Oke, Managing Director, Black Cultural Archives said: “London’s Black history is deeply embedded in its streets and neighbourhoods. We’re delighted, as part of our 40th anniversary celebrations, to use this opportunity to share new and old stories about Black history with Londoners and visitors to London.

“We hope that the map will be an invitation to find out more and to explore.”