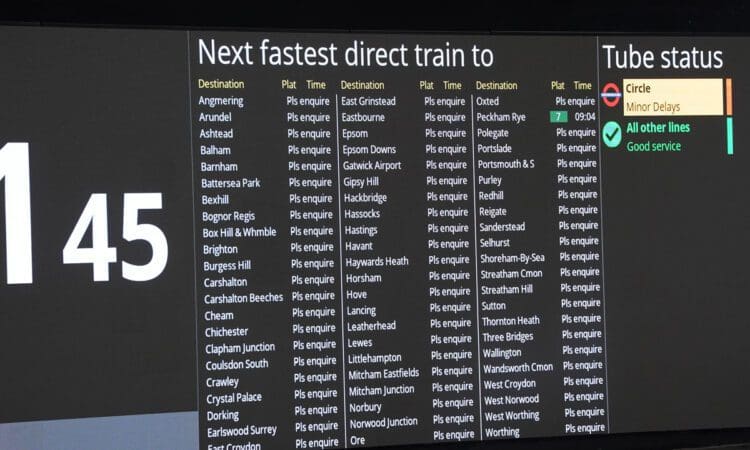 Rail passengers were hit by disruption on the first working day of the year in England and Wales due to a combination of faults and coronavirus-related staff shortages.

No London Overground services were able to run between Clapham Junction and Surrey Quays on Tuesday morning due to a fault on a train.

National Rail Enquiries warned passengers that a “problem under investigation” between Darlington and York was causing disruption between the stations.

Merseyrail services were suspended between Kirkdale and Kirkby following a power supply problem.

Urgent repairs were being carried out to replace part of the signalling system in Slade Green, south-east London, following an electrical fault.

The issue meant the line through the station towards Dartford was blocked, affecting Southeastern trains.

Network Rail tweeted that it sent technicians to Lewisham, also in south-east London, to fix a new set of points which “worked fine all night in testing and of course has gone wrong now”.

The problem caused disruption to Southeastern services on one of the main lines into the capital.

Rail journeys across Britain were also being hit by many operators using reduced timetables in a bid to improve reliability after weeks of short-notice cancellations due to staff shortages caused by the coronavirus pandemic.

ScotRail implemented a temporary weekday timetable on Tuesday as the Omicron variant of Covid-19 has resulted in a “large number of absences”.

More than 150 daily services have been cut, including on routes such as Glasgow to Edinburgh via Airdrie/Bathgate; Glasgow Central to Lanark; Edinburgh to North Berwick; and Edinburgh to Tweedbank.

Other examples include Southern not serving London Victoria until January 10, while CrossCountry has removed around 50 daily trains from its timetables until next week.

Demand for rail travel is at around 50% of pre-pandemic levels.

This is partly due to the guidance for people to work from home.

The first working day of the year in Scotland is on Wednesday.