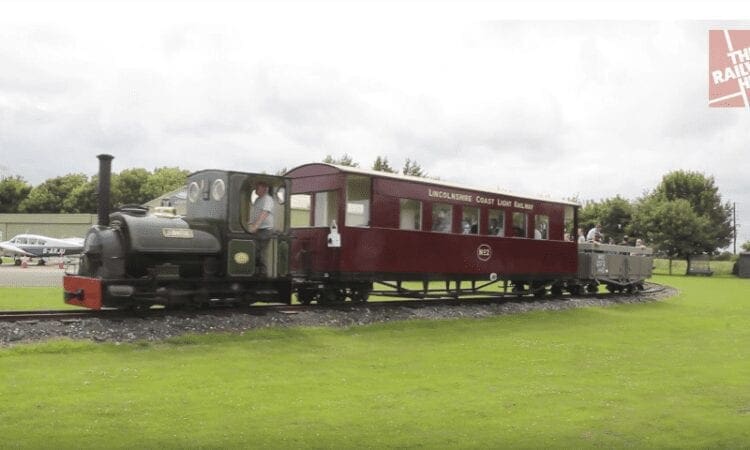 The 2ft gauge Lincolnshire Coast Light Railway (LCLR) celebrated the tenth anniversary of it reopening in Skegness on July 13.

An iced wooden ‘cake’ was ‘fed’ to the line’s Peckett 0-6-0ST Jurassic at its Walls Lane station, in the Skegness Water Leisure Park in Ingoldmells by the Mayor of Skegness, Coun Mark Dannatt, accompanied by The Jolly Fisherman, the local mascot.

The ‘cake’ – actually a piece of old railway sleeper – was decorated by 18 year old Horncastle student Millie Waby, who enjoys baking and icing cakes – but not normally, ones made of wood for railway engines!

What was first railway in Britain to be built by enthusiasts reopened in 2009 on a new site 42 miles to the south of its original location. Since then, the track has gradually been extended and now totals three-quarters of a mile.

LCLR spokesman, John Chappell, said: “It is extraordinary what has been achieved since May 2009. Who would have thought that we would welcome a member of the Royal Family to the railway? Who would have dared to think that Jurassic would steam again with the help of a Lottery grant or that the rusting remains of one of the old wartime wagons from 1917 – the only survivor from those built in Lincoln by Clayton & Shuttleworth –would be transformed into a disabled access carriage?

“The whole railway has been rebuilt and extended and its historical significance is now widely appreciated – and at just £1 for a return journey, it means families can enjoy the thrill of a ride on a true heritage railway.”