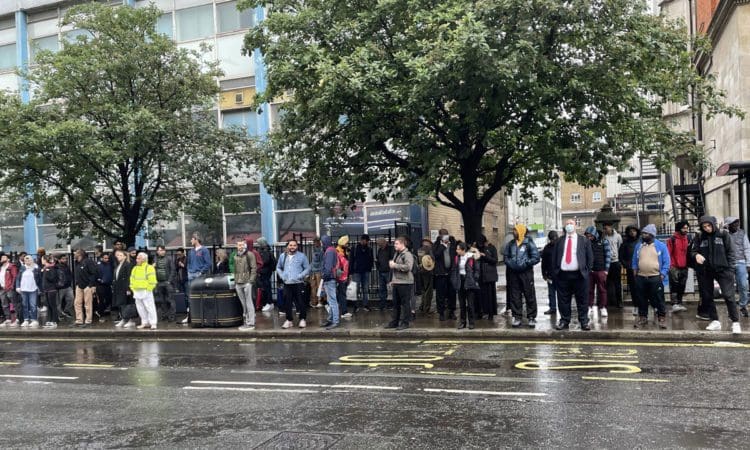 There was severe disruption across the network on the first working day after the Platinum Jubilee bank holiday period as 4,000 members of the Rail, Maritime and Transport (RMT) union who work at Tube stations conducted a 24-hour walkout.

The strike is part of a dispute over jobs and pensions.

A reduced timetable was operating on some London Underground sections, with services suspended elsewhere.

Many stations, especially those in central and south London, were closed, causing long queues for buses.

Construction worker Miguel Basantes was stranded at Paddington station as he tried to get to work in Hampstead.

The 54-year-old described the situation as “chaos”.

He went on: “In Liverpool Street there were crowds of people and I was waiting for 20 or 30 minutes.

Indian restaurant worker Kundan Darla, 25, said: “I think it is bad, I am too late for work.”

Frustrated passengers gathered around the entrance to Waterloo station.

Charlotte, who did not give her last name, from Surbiton, said she was unsure if she would be able to complete her journey to Canary Wharf.

“We’ll see if anything opens up, and I’ll go home if it doesn’t,” she said.

“I’m pretty sure everyone will be delayed coming in today.”

She said she had been traveling for almost an hour already, adding that she did not feel the industrial action was justified.

“I don’t necessarily see the reason for the strike,” she said.

“It doesn’t necessarily feel like it’s justified to cause this much disruption, especially when London is getting up and running again. It seems like a big setback for the city.”

Tracy Brown, 45, a mother-of-three from Acton, told the PA news agency: “Getting three children ready in the mornings for school is hard enough without a Tube strike making things harder.

“I am fed up of running around to get my children to school on time because some people are so greedy.”

Paul Glennon, 52, a construction worker in central London, said: “It is back to reality for all of us. No more parties and parades.

“I have spent my whole morning getting on and waiting for packed buses in the rain.”

Location technology firm TomTom said the level of road congestion was 71% at 8am, up from 64% a fortnight earlier.

The figures represent the proportion of additional time required for journeys compared with free-flow conditions.

Transport for London (TfL) said no plans have been tabled on pensions or terms and conditions, and nobody will lose their jobs because of the proposals it has set out.

As part of previous funding agreements, the Government has required TfL to work towards achieving financial sustainability on its operations by April 2023.

TfL has proposed not recruiting into around 500 to 600 posts as they become vacant.

The RMT said that, under current proposals, working agreements will be torn up and the looming threat to pensions remains in place.

General secretary Mick Lynch said: “We are demanding a direct face-to-face meeting with mayor Sadiq Khan to sort this mess out.

“There’s no point in our union continuing to sit opposite management representatives who have neither the inclination nor the authority to negotiate a settlement, when the power lies with the mayor.”

Downing Street condemned the strike due to its impact on passengers and businesses.

“This sort of action is deeply disappointing and not what the public want to see, not what we want to see for businesses still trying to recover post-pandemic, people’s lives being disrupted in London,” the Prime Minister’s official spokesman said.

“Obviously industrial relations at TfL are a matter for TfL and the mayor but it’s clear that, under the current funding settlement, TfL must take all reasonable steps to avoid industrial action.”

RMT members on the Tube are also taking action short of a strike, meaning station staff might not work overtime, until Sunday July 10, which may result in short notice station closures.Show less