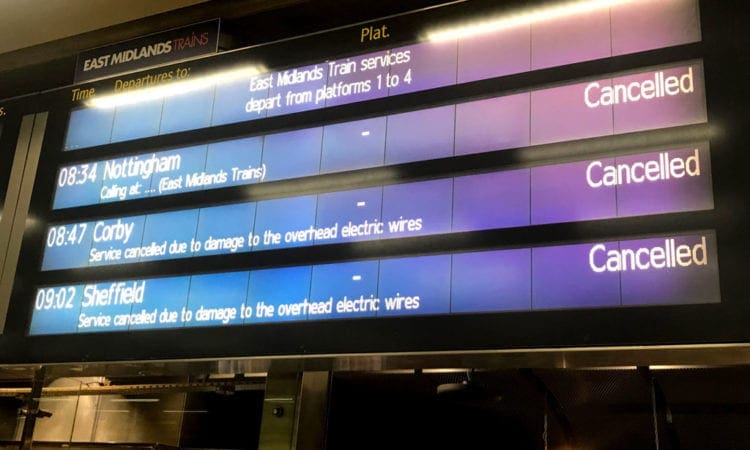 Train passengers face more delays and are being urged to avoid unnecessary travel as efforts continue to repair damage to the network caused by record-breaking July temperatures.

There are also delays and cancellations at Heathrow, the UK’s biggest airport because of “extreme weather conditions across Europe”.

Network Rail is urging commuters planning to use the Midland Main Line between St Pancras and Sheffield to check before travelling due to reduced service levels.

Network Rail said in a statement: “Yesterday saw significant disruption on the rail route which links Sheffield to London St Pancras International via the East Midlands and Bedfordshire.

“Trains had to run at reduced speeds, which also meant a reduced service ran and those which did run were extremely busy.”

Train speeds are being reduced to cut the likelihood of steel tracks buckling after multiple incidents on the network, including problems with overhead equipment on the line between Kentish Town and West Hampstead and a fire near the railway in West Hampstead.

Network Rail added: “Passengers are strongly advised to consider alternative travel arrangements and only travel if their journey is absolutely necessary.

“If passengers must travel, they are urged to check before travelling with their train operator or with National Rail Enquiries. Passengers should allow additional time for their journey and take plenty of water with them.”

West Midlands Railway said overnight work to repair damage was still ongoing and many trains were starting the day out of place, resulting in some cancellations and shorter trains.

The weather is also causing difficulties to flights. British Airways announced that “severe thunderstorms are causing significant delays and cancellations to our operation in and out of London”.

Heathrow Airport asked travellers to “please check with your airline before travelling”, adding that: “We’re sorry for the disruption & are working with our airline partners to keep passengers travelling.”

Thousands of passengers were left stranded at major stations on Thursday, the hottest July day on record, as temperatures of up to 38.1C (100.6F) created havoc.

One passenger posted a video on board a stationary London North Eastern Railway (LNER) service showing sweat-soaked commuters, including a man with a baby, desperately fanning themselves.

Another image showed a collapsed man being treated by medical staff outside the train.

Thunderstorms in the south-east of England were continuing to bring heavy rain, gusty winds and lightning on Friday morning.

“The thunderstorms could continue on and off through the course of the day,” Met Office meteorologist Greg Dewhurst told PA.

“There is enough energy in the atmosphere to keep it going.”

Temperatures will range from the mid-20s to the low 30s on Friday, Mr Dewhurst added.

The dangers of cooling off in lakes, rivers and the sea were highlighted by emergency services after the bodies of three people were pulled from water after they reportedly got into difficulty swimming during the week’s heatwave.

There were also record-high temperatures recorded in Europe, including Paris which hit 40.6C (105.1C).

But the country will see more familiar conditions return over the weekend, with the weather becoming less settled and an increased chance of rain for many eastern and north-eastern areas.

The Government’s advisory Committee on Climate Change has warned the UK is not prepared for the increase in heatwaves that is expected with global warming.