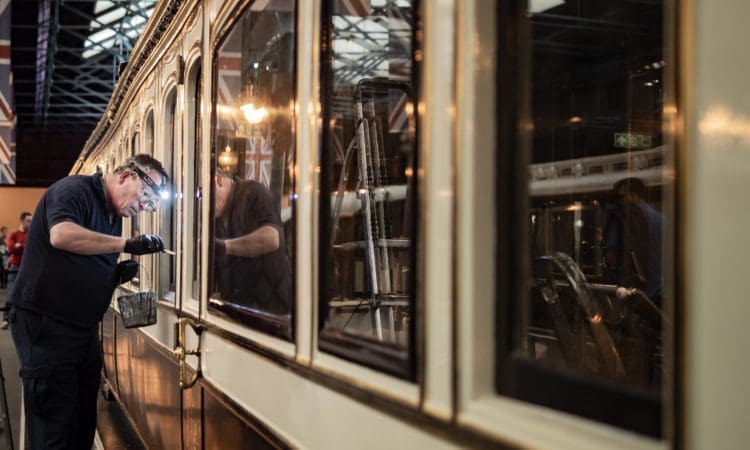 The National Railway Museum is set to feature in a new TV series produced by Whitworth Media appearing on More4 this summer.

Narrated by Sheridan Smith, this new series follows the work of some of Britain’s army of dedicated conservation cleaners who look after our national treasures. Other locations to feature in the series include stately homes, historic churches and museums.

The programme aims to demonstrate the techniques and tricks of the trade used to clean and preserve historical artefacts, and each episode follows the cleaners at three locations around the UK.

Stories in this first series include the mystery behind a Constable masterpiece that may be solved by cleaning it; the restoration of a glorious mantelpiece at Beatrix Potter’s Hilltop Farmhouse in the Lake District; the extremely delicate cleaning of Queen Victoria’s silk-laden Royal Saloon railway carriage; and finding out how to clean the fragile Portland limestone carvings of a London church.

The National Railway Museum is featured in the first episode of the series expected to be broadcast in July. In this episode,the cleaners take on two of the museum’s most important carriages: the 1906 Dynamometer Car, which was used to test steam locomotives and famously authenticated Mallard’s world speed record run in 1938 and Queen Victoria’s luxurious 1869 carriage.

The National Railway Museum has a dedicated conservation team which is supplemented by volunteers who work to ensure the collection looks its best for visitors.

In the first episode, retired conservation assistant Chris Binks returns to supervise trainee conservator, Shoun Obana as they clean the two carriages. First, they tackle the Dynamometer Car. Displayed next to Mallard and crammed with antique, analogue recording equipment, the episode provides a snapshot inside the space which can normally only be viewed through the windows.

The second assignment sees Chris and Shoun inside the Royal Saloon of Queen Victoria’s LNWR private train. This time Chris must supervise from outside as Shoun cautiously cleans the silk fabrics and delicate gilded plasterwork, providing insights into how the royals used to travel by train.

Emma Hogarth, Conservation and Collection Care Manager, said: “Programmes such as this can be an important way to let people know about the conservation and cleaning work that goes on behind the scenes to help look after the national collection and I am looking forward to seeing the National Railway Museum episode later this summer.”

The museum has appeared on several TV shows this year including BBC Bargain Hunt, The World’s Most Scenic Railway Journeys on Channel Five and the replica Rocket even made a brief appearance in Gentleman Jack.

As well as displaying six royal carriages in Station Hall, the museum has launched a temporary exhibition in Great Hall called Royals on Rails which explores the British royals’ love of railway travel. Visit https://www.railwaymuseum.org.uk/whats-on/royals-rails for more information.