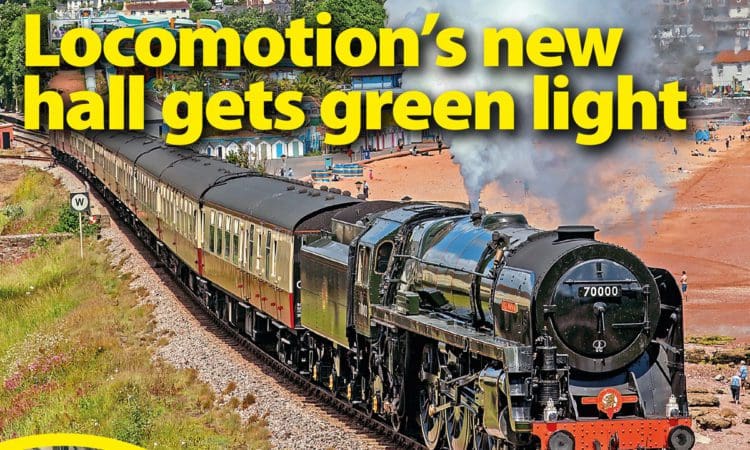 Issue 295 of Heritage Railway is on sale now! Here’s what you can expect to find inside our latest edition.

Remember, there are so many ways you can help our railways up and down the UK during these difficult times, so keep up to date with the essential railway news with Heritage Railway magazine and find out how.

If you’d like to give this edition of Heritage Railway magazine a read, then you can skip the wait and download the digital version or you can order the print magazine. Better yet, why not save some pennies and subscribe to Heritage Railway. Here’s what to expect this month…

The Llangollen Railway has run the first steam train into its new Corwen Central terminus as the site takes another step closer to opening to the public. The special ran using GWR 0-6-2T 5600 class No. 5619 on hire from the Telford Steam Railway.

The National Railway Museum’s Locomotion ‘outreach station’ at Shildon has been granted planning permission for a new hall, allowing the venue to press ahead with the transformation planned for the site.

Britain’s railway heritage engineering sector has reached a new apex, with the three cylinders for new Gresley P2 2-8-2 No. 2007 Prince of Wales placed together for the first time prior to welding to create the locomotive’s monobloc – a first for the UK since the Forties.

When the Cotswolds became the Mendips

The Gloucestershire Warwickshire Railway had to wait two years to hold its ’Somerset & Dorset Remembered’-themed Cotswold Festival of Steam, but the three-day event over the Platinum Jubilee weekend proved a resounding success

It has been six years in the planning and making – now Britain’s newest all-new heritage railway has been officially launched. The Lord Lieutenant of Lincolnshire, Toby Dennis, unveiled a plaque to formally open the Ropsley Heath Light Railway, near Grantham, before driving Nimrod, the line’s first steam locomotive, through a ribbon.