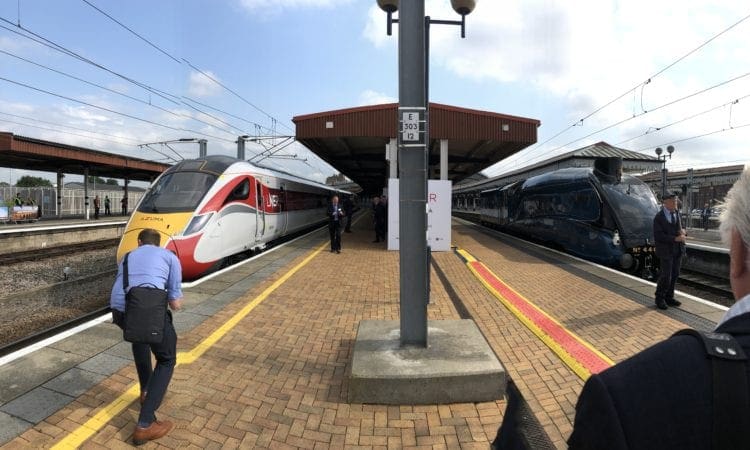 David Horne, Managing Director of LNER, has officially launched the new Azuma trains, ahead of services commencing north to Edinburgh on August 1.

Before the Azuma arrived to crowds of spectators and the media, LNER icon, the Mallard, was greeted at the platform in a rare outing. The Azuma sees LNER introduce new trains into its York and Edinburgh services for the first time in 30 years.

The new Azuma fleet, built by Japanese company Hitachi, boasts of around 100 more seats per train compared to the current fleet, and features extra leg room and free wifi.

The new trains have already been running services on the East Coast mainline since May, but were not launched in Scotland.

David Horne spoke of a Renaissance period for Britain’s railways, and of his excitement at providing a new service in the iconic railway city of York.

The new Azuma trains can travel at speeds of 140mph, however it is said that the lines will allow the trains to run at 125mph.

Azuma is a diesel-electric hybrid made in the County Durham by Hitachi’s manufacturing team, using parts sourced from British suppliers, and can run on green electric energy or diesel.

The Japanese state-of-the-art trains are quieter, more efficient and more environmentally friendly than previous models, and come with added luxuries.

Standard class passengers can expect can extra 7cm of legroom, as well as more overhead and under-seat storage, space for laptops and practical solutions like coat hooks.

They’ve got window blinds for comfort, plus the seats are designed for added comfort. Meanwhile, in First Class, seats recline and there are even bigger tables.

The Azuma train carried VIP guests and the media on a return journey to Darlington, where the new Japanese train lined up alongside historic locomotive, the Flying Scotsman.

Director of Communications, Kate McFerran said: “LNER’s rich heritage of history-making moments provided the inspiration for bringing the two trains together, as the business prepares to introduce new trains into its York and Edinburgh services for the first time in 30 years.

“LNER is incredibly fortunate to have the history of Sir Nigel Gresley, Flying Scotsman, Mallard and speed records to inspire us as we build a new and exciting future for the business,” Ms McFerran said.

“It’s this history that drives us further forward to do more, innovate more and set higher milestones to transform our business. We are working hard to innovate and create new history-making moments, and Azuma is the first bold step towards delivering on that vision.”