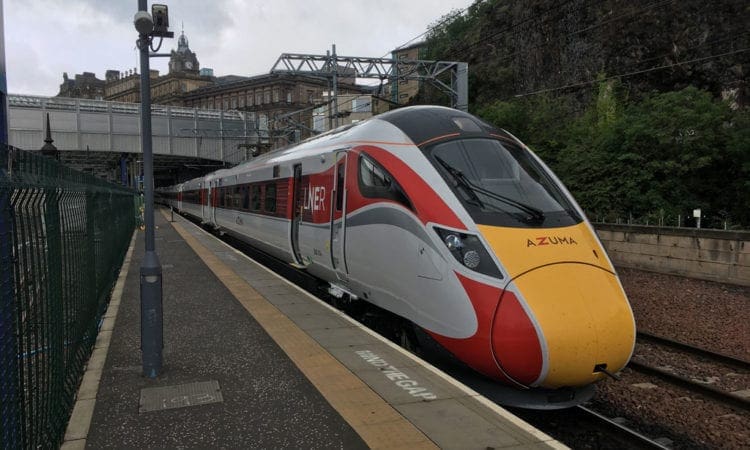 LNER launched its Hitatchi-built Azuma train on the Flying Scotsman service from Edinburgh to London King’s Cross on August 1.

The Class 800 Azumas have been operating between London and Leeds since May 15 2019, but were delayed from running further north due to modifications to the signalling and power supply.

David Horne told us: “From September we’ll be adding more trains into the timetable at the rate of around one train per week entering service.

“With 65 trains in total, that means by summer 2020 we should have them all in service.”

Following a similar launch at York earlier this week, August 1 also saw the first passenger service of the Azuma on London to York services. Before the Azuma arrived to crowds of spectators and the media, the Mallard was greeted at the platform in a rare outing. The Azuma sees LNER introduce new trains into its York and Edinburgh services for the first time in 30 years.

To mark the start of the Anglo-Scottish services, the Azuma rolling stock was emblazoned with a specially designed tartan. On board, crowd-pleasing band the Red Hot Chilli Pipers performed a gig while travelling at 125mph.

The new Azuma fleet, built by Japanese company Hitachi, boasts of around 100 more seats per train compared to the current fleet, and features extra leg room and free wifi.

Azuma is a diesel-electric hybrid made in County Durham by Hitachi’s manufacturing team, using parts sourced from British suppliers, and can run on green electric energy or diesel.

The Japanese state-of-the-art trains are quieter, more efficient and more environmentally friendly than previous models, and come with added luxuries.