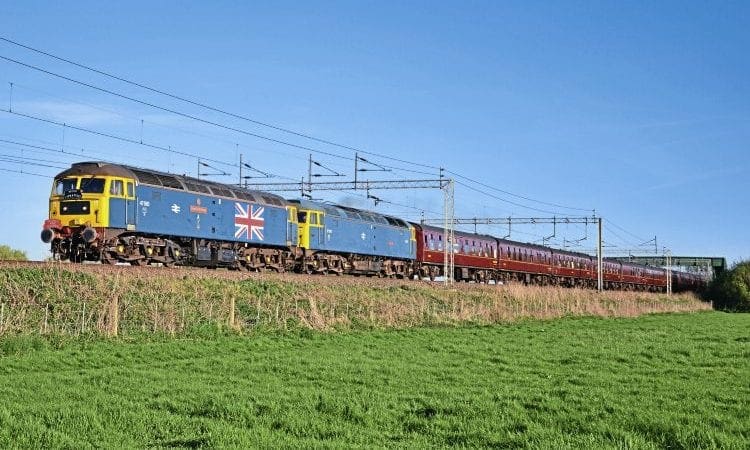 THE preserved Class 47 fleet could be said to be in excellent shape. There is a good spread of different sub-classes; they are well dispersed, so everyone can enjoy at least one locomotive nearby; and the vast majority are either operational or are genuinely being restored or undergoing overhaul.

Although the National Railway Museum’s Royal ‘47’ No. 47798 is now restricted to base, there are still three main line-registered examples, with another due to return later in the year, providing a little additional variety to the ‘Brush 4’s still operating on the national network.

In total there are 30 of the Brush machines in preservation, with 17 operational, eight on the way back, and five either stored or for spares.

By far the most patriotic locomotive in the country is the Stratford 47 Group’s No. 47580 County of Essex, which has been running around since June 2012 in a Union Flag livery inspired by the iconic 1977 Jubilee pairing of Nos. 47163 and 47164.

Stored as No. 47732 in April 2004, it was sold to metal recycling firm EMR in the big EWS locomotive sale in early 2007, who flipped it for preservation straight away.

It was moved to Tyseley in April 2007 and was quickly returned to service, repainted into Stratford Large Logo livery and reunited with its 47580 number and ‘Essex’ name at an event in June the following year.

Read more and view more images in the August issue of RE – on sale now!