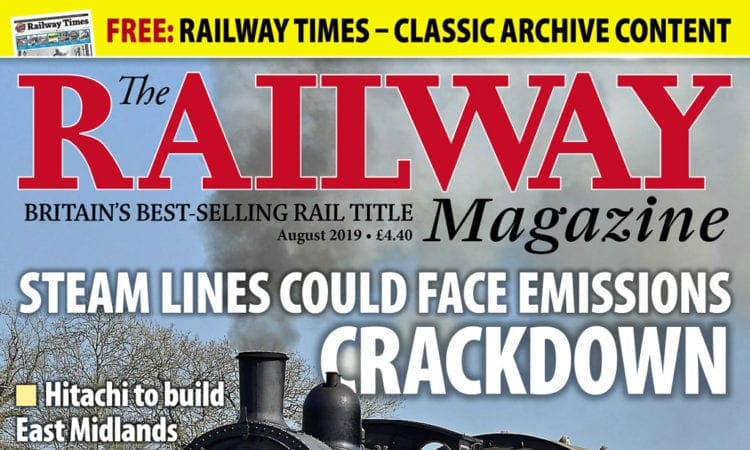 Britain’s best-selling rail title is back for another month of award-winning photos, news, features and exclusives from the rail industry, past and present.

This month’s The Railway Magazine features the crackdown on steam lines because of emissions; the Azuma meets Mallard plus take a look at some superb footage in our drones footage special!

STATE OF THE ART | Nick Pigott recounts the story of the Guild of Railway Artists, which is celebrating its 40th anniversary in 2019.

TRAIN TEST: NORTHERN CLASS 195 and 331 | Chris Milner samples Northern’s new Spanish-built diesel and electric trains to find out if they deliver the expected leap in quality over their predecessors.

WEST HIGHLAND CELEBRATION | Marking the125th anniversary of one of the world’s most scenic railways, Keith Farr starts a two-part study of train performance on the West Highland Line.

PLUS | The Railway Magazine’s monthly news digest covering industrial, steam, Irish, narrow gauge, metro, network, freight and more! Discover some of our readers’ tales in the Reader’s Platform, and make a date for upcoming events in your railway calendar!

Be sure to explore our website too for the latest news updates, teasers, and find out how you can get involved! Just visit: www.therailwaymagazine.co.uk

Subscribers to The Railway Magazine can enjoy unlimited access to the publication’s digital archive from as little as £2 per month.

Get unlimited access to The Railway Magazine digital archive online, on your computer, tablet and smart phone. With more than 100 years’ worth of back issues available, newly digitised editions are added regularly. The collection is fully searchable, you can click to zoom and turn pages and images are all high-resolution where available.

Will the new Westminster team deliver rail improvements sooner, later or not at all?

It is too early to predict whether Boris Johnson as the new Prime Minister and Grant Shapps as Transport Secretary will be good or bad news for Britain’s railways. Unfortunately, railways and politics have become very tangled – there’s no escaping that fact.

Leaving aside the more pressing aspect of the withdrawal from the European Union by October 31, the in-tray of Mr Shapps has a number of items demanding his attention.

With new ministers in virtually all departments, there will be a spotlight on budgets as well as the promises made by the new Prime Minister in the leadership election. Mr Johnson and Mr Shapps have a number of key areas to tackle, including:

■HS2: With suggestions costs have spiralled by a further £20-30billion, such news simply adds fuel to the cause for those vehemently against the project. Yet with rail patronage on the West Coast and its associated routes showing no sign of slowing down, what are the alternatives to HS2? Building more lines out of London alongside existing routes and motorways would be a minefield of objections, delaying the much-needed extra capacity well beyond 2030. Plus, if HS2 was cancelled, I’d guarantee there’ll be an awful lot of companies seeking contractual compensation, which will run into many millions of pounds for the Government. It’s a rock and a hard place for the decision makers.

■The Williams Review: Keith Williams has already confirmed franchising is broken and there is too much interference from the Department for Transport, suggesting a more ‘arms length’ approach, echoing the era of the Strategic Rail Authority. Operators need space for more scope and innovation too, and less of the dictatorial approach to franchises or whatever replaces them.

What I hope doesn’t happen is that his final report, due in September, is not ignored to gather dust, nor used as a door stop for Mr Shapps’ office.

■Electrification: Development and the creation of a proper infrastructure for battery and hydrogen trains is several years away, yet cancelling electrification was a slap in the face for rail users whose lines might benefit. On the Midland Main Line passengers have been fobbed off with bi-mode trains, while at the same time London and stations south of Market Harborough have been relieved of polluting diesel because it will be electrified.

Though supportive and encouraged by alternative energy options, there seems to be an element of all ‘eggs in one basket’ with the bi-mode approach, while this new technology continues to evolve. What the people of the East Midlands (and elsewhere) want – and fully deserve – is a clean, efficient electric railway, and it’s something Mr Shapps should plan for, as well as revisiting fill-in electrification schemes.

■Ticketing: Passengers have, for a long time, been promised ticketing reforms, and the vast majority of passengers know it is needed.

Last month I travelled from Nuneaton to Leeds. The price of an anytime return was £88, but I felt challenged to find something cheaper. Even though it was company business, I felt there was a point to prove about the flawed ticketing system.

The result was four separate anytime tickets: Nuneaton-Tamworth, Tamworth-Derby, Derby-Sheffield and Sheffield-Leeds, at a total cost (with a railcard) of £39.80, a saving of 55% – and using exactly the same trains as the £88 ticket.

The fact the sum of the parts didn’t equal the whole represents another aspect of ‘Rip-off Britain’, allowing train operators to pocket the money for providing nothing extra. How can this be right?

After the timetable chaos of May 2018, improvements have come, but in some cases, operators are not making enough effort. An example is the last evening trains from major cities. The last trains from Birmingham to Leicester as well as Nottingham via Derby, are timed at 22.22 and 23.09 respectively, and have hardly changed in the past 35 years – ridiculously early departures that prevent a night out in Britain’s second city and making a connection from a train or flight from elsewhere.

Several readers have emailed me about erroneous information on station display boards, where in one case the customer was effectively told to ‘mind their own business’ when he challenged it, knowing it was wrong.

There should be no excuse for tardy or incorrect information regardless of source.

Very much in need of early attention by
Mr Shapps and his department is the need to make some interim improvements to the CrossCountry franchise rolling stock.

It’s now almost a year since the re-tendering was paused, and even though talks are said to be taking place, there is still no news of any extra rolling stock. Meanwhile, 200 HST trailers and 22 power cars lie stored, slowly deteriorating, so there is no respite for passengers on desperately overcrowded trains on all CrossCountry routes.

On-going delays getting new trains into service is not helping to ease overcrowding, and where new trains have been introduced, some classes are displaying teething issues. What’s worse is the increase every month of new rolling stock being stored because staff are not trained, or they can’t be accepted because of technical issues.

Meanwhile, instead of putting pressure on manufacturers, the Government shrugs its shoulders and says “rolling stock is a matter for the operator” in terms that would mirror an episode of ‘Yes Minister!’ I’ve seen the letters.

In hindsight, when all this rolling stock was ordered, it begs the question why no decision was made to build a proper loop test track of four or five miles in length, to enable problems to be ironed out. Too late now: the ‘legacy’ trains cling on and passengers wait for the improvements they deserve.

Some pundits are predicting the time in Government may be short for Mr Johnson and his team. Whatever happens, for too long the needs of passengers have been neglected, and regardless of which political party is in power that has to change. Passengers must always come first.