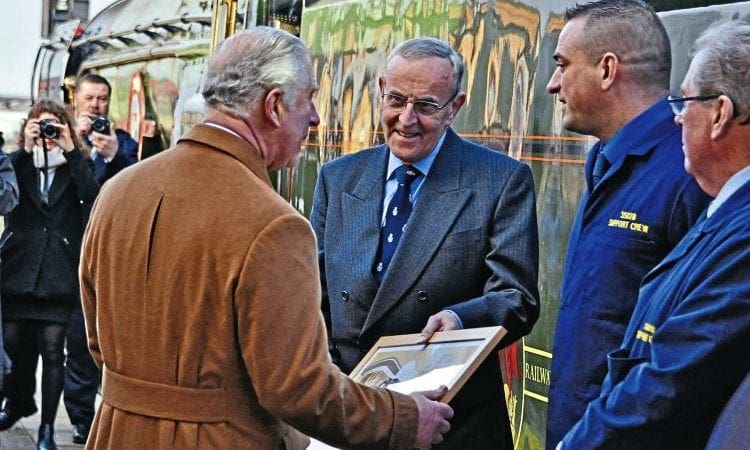 December was an unexpectedly special month for Clan Line – for it hauled the Royal Train, in addition to the owning group, the Merchant Navy Locomotive Preservation Society (MNLPS) celebrating the locomotive’s 70th birthday of its release into traffic on December 23, 1948.

During November, the society received a special request for Clan Line to haul the Royal Train, with Prince Charles on board, from Newport to Cardiff Central on December 7.

This was to tie in with official engagements in the Welsh capital and involved a diesel-hauled light engine move on the previous day for overnight stabling in the area. Clan Line then coupled up to the Royal Train for the short journey to Cardiff.

The Prince spoke to the support team and footplate crew at Cardiff, where he was presented with a framed art deco souvenir of the locomotive. It is reported that he was also disappointed it was only possible for the Royal Train to be hauled a short distance by steam. Clan Line then returned immediately to London, to enable it to be ready for the Belmond Pullman on the following day.

Engineering work in the Stewarts Lane and Redhill areas gave the paying guests a bonus of over five hours to enjoy the fine dining on board this trip with the Pullmans.