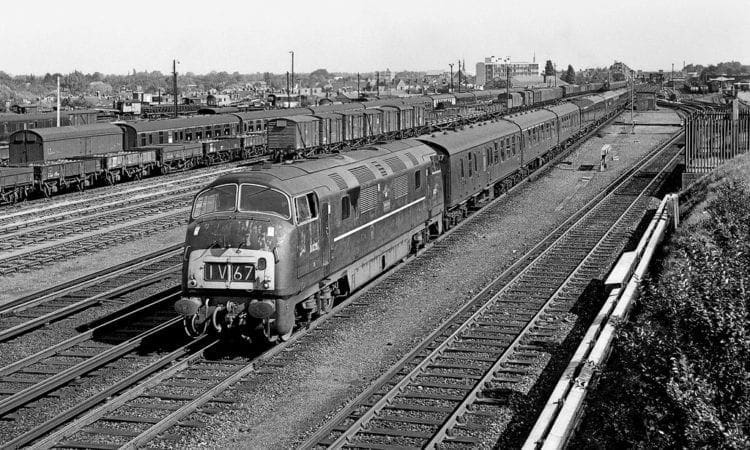 As celebrity ‘Warships’ go, No. D829 Magpie enjoyed royal status and the TV spotlight through the children’s series of the same name.

The class finished on British Railways in December 1972, but rumours continued to circulate throughout the following years that the Thames TV programme wanted to save the locomotive for preservation.

However, thanks to newly revealed documents, the full and fascinating story can now be told.

When celebrity ‘Warships’ are mentioned, the usual suspects are trotted out.

The preserved duo of Nos. D821 Greyhound and D832 Onslaught are spoken of in the same breath as the one that got away – D818 Glory – scrapped at Swindon following the decision to close Swindon Works in the 1980s.

But there was another member of the Class 42 examples with, perhaps, more of a celebrity pedigree than all of these, and that locomotive was No. D829 Magpie.

The loco was driven by the Duke of Edinburgh, and in 1969 found fame when it was adopted by the new Thames TV programme Magpie, which was produced and packaged for kids as a more ‘street cred’ rival to the BBC’s Blue Peter.

After entering into traffic from Swindon on November 23, 1960, No. D829 first found fame at the Golden Jubilee celebrations at Marylebone goods station on May 12, 1961. This was an exhibition of locomotives and rolling stock, arranged by the British Transport Commission (BTC) to mark the 50th anniversary of the Institution of Locomotive Engineers.

It was attended by more than 600 members and their guests. The institution was honoured by the presence of HRH Prince Philip, Duke of Edinburgh, who had accepted the council’s invitation to visit the exhibition.

The Duke was received by the president of the institution, D C Brown CBE, and was then presented to his party, which included such luminaries as Sir Brian Robertson, chairman of the BTC, whose name adorned the first ‘Warship’ No. D800; Dr Richard Beeching, part-time member of the BTC and chairman designate of the future British Railways Board; R C Bond, past-president, technical adviser to the BTC; Sir William Stanier FRS, past-president; and J F Harrison, president-elect, and chief mechanical engineer, BR central staff.

Following on from the presentation, the Duke was invited to remove a Union Jack flag that covered the name of Magpie. This was not a naming ceremony as the locomotive had left Swindon in November 1960 carrying the plates.

No, it was done as a gesture to the Prince who commanded just one naval warship during his sea career and that was the frigate HMS Magpie.

In July 1950, he had been promoted to Lieutenant-Commander, and in September he was appointed in command of the frigate until 1952; the ship was eventually broken up in July 1959. So, the nameplate unveiling was nothing more than a lovely touch by the institute and more was to come as the Duke was then allowed to take the controls of ‘his’ locomotive.

Read the FULL feature in the August issue of The Railway Magazine – out now.