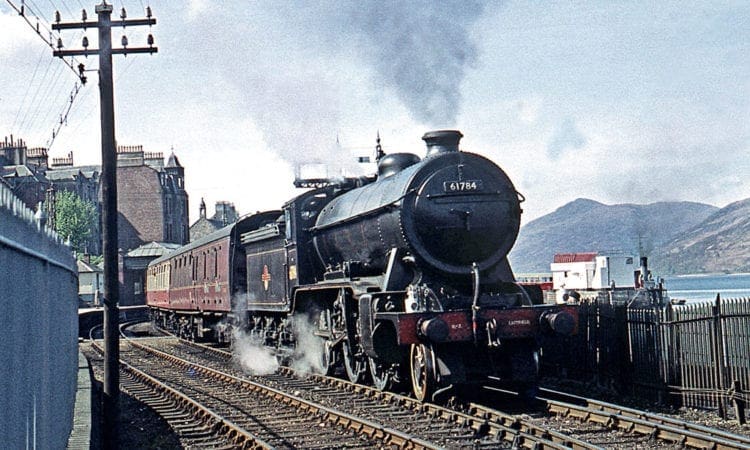 In the first of two features focusing on the West Highland line, which marks its 125th anniversary this year, Keith Farr analyses steam-hauled journeys over this scenic and demanding route.

Glasgow (Queen Street) high-level terminus is being transformed. Platforms are being extended to cope with more frequent and longer trains and the station front is moving forward to the fringe of George Square.

One hopes the sign above the concourse, Failte d’on Gaidhealtachd, (‘Welcome to the Land of the Gael’), is being retained; for, as well as a host of services to Lowland destinations and the Central Highlands, a few penetrate some of the most outstanding scenery in the British Isles en route to the west coast, where Gaelic conversation can still be heard.

It was 125 years ago, on August 11, 1894, that the inaugural train from Glasgow steamed under a triumphal arch as it entered Fort William station on the shore of Loch Linnhe. Motive power comprised two North British Railway Holmes 4-4-0s, newly built for the steeply graded line, hauling saloon coaches specially designed for a scenic journey.

Leaving the former NBR North Clydeside network at Craigendoran Junction, the single track follows Loch Long and Loch Lomond to Glen Falloch and Crianlarich before traversing Rannoch Moor and dropping into Glen Spean, turning south-west to Fort William, all but 100 miles from the Clyde.

Earlier proposals had included one by the Glasgow & North Western Railway for a line up the east side of Loch Lomond, then following the route of the present railway to Bridge of Orchy before descending into Glencoe and heading up the Great Glen through Fort William to Inverness.

Opposition from the Caledonian and Highland companies put paid to this threatened intrusion and so the West Highland Railway came into being, with the North British as its operator.

Initially restricted to 25mph, WHR trains were powered by various NBR 4-4-0 and 0-6-0 classes. A big step forward came in 1913 with the introduction of Reid’s ‘Glen’ class 4-4-0s, permitted 180 tons tare over the long 1-in-60 gradients, and proving themselves grand hill climbers, although, as trains grew heavier, they often hunted in pairs.

After the 1923 Grouping, help came in the form of LNER Gresley ‘K2’ 2-6-0s, modified with side window cabs to protect crews from West Highland winter weather, and many named after nearby lochs. They were allowed to take 220 tons over the route, although the late O S Nock considered they were less happy with that load than a ‘Glen’ with its 180-ton maximum (some sources quote 190 tons).

In the 1950s, ‘K2s’ were still piloting 4-6-0s on the heavier Glasgow workings, invariably coupled ‘inside’, in accordance with NBR and LNER practice.

As late as August 23, 1958, on Rannoch Moor, it was a pleasure to see an Up passenger train in the charge of a pair of these ‘Ragtimers’, although they continued into 1960 on the Mallaig Extension. Just as Gresley had designed his ‘P2’ 2-8-2 specifically for the Edinburgh to Aberdeen road, he looked for a powerful loco to handle the increasingly heavy trains on the fiercer gradients of the West Highland. However, a modified ‘K3’ 2-6-0 was vetoed by the civil engineer, as was a scheme for a 2-8-0 with 5ft 2in coupled wheels.

Which brings us to the ‘K4’, a three-cylinder 2-6-0 capable of taking 300 tons over the line unassisted. Completed at Darlington in 1937, No. 3441 Loch Long had 5ft 2in coupled wheels and 180lb boiler pressure, later increased to 200lb, bringing the loco’s nominal tractive effort to 36,600lb – higher than that of any Gresley Pacific, and making the ‘K4’ the most powerful steam type to work regularly over the line (see Panel 1).

Possibly the earliest known log of ‘K4’ performance was recorded by O S Nock and featured in Cecil J Allen’s ‘Locomotive Practice & Performance’ contribution in The Railway Magazine for January 1938.

Nock wrote: “…the new engine (Loch Long) was loaded to within 14 tons of her rated maximum…her performance was a triumphant success…doing about 50 per cent more work on the same amount of coal and water as a ‘K2’”.

The log (Table 1) starts at Dumbarton, from where the ‘K4’ accelerated to 57mph alongside the Clyde before slacking to take the West Highland line proper at Craigendoran Junction.

Almost immediately, they were in the Highlands: from the restart at Craigendoran (Upper), now closed, the single line climbs at 1-in-58 to Helensburgh (Upper) and three-cylinder Loch Long, accelerating to 21mph on full regulator and 40% cut-off, would have made mighty music, similar to that of a single-chimney ‘A3’ working hard at 30mph.

Read the full feature in the August issue of The Railway Magazine – out now.