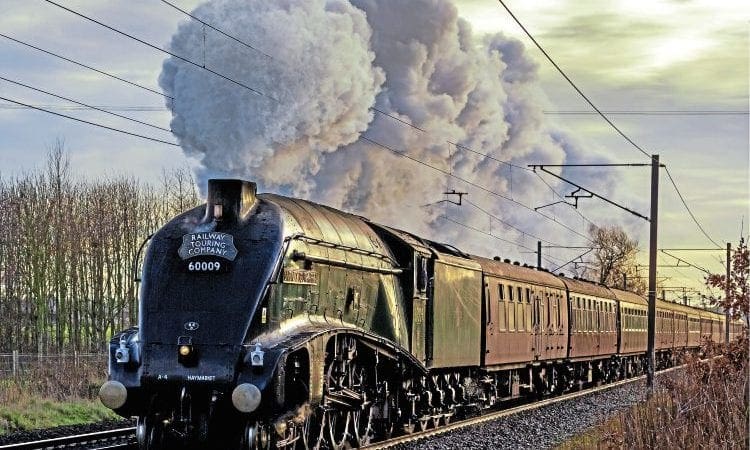 In December 2017, the Railway Touring Company ran its usual series of steam tours to York during the festive season. A major selling point was the use of two Class 8 Pacifics – LMS Princess Coronation No. 46233 Duchess of Sutherland and LNER A4 No. 60009 Union of South Africa; one in each direction.

In the event, neither locomotive was available and a shortage of substitute steam engines led to LMS 4-6-0 No. 46100 Royal Scot taking the Duchess turns while the A4’s diagrams were handled by a West Coast Railways’ diesel.

For the 2018 festive season the RTC had another go, with the A4 back in top form and the Duchess back in main line action after attention at Butterley and a repaint into LMS maroon as No. 6233. This time all went well on the first run of the two-engine series on Thursday, December 6; the ‘York Yuletide Express’ with No. 60009 making an on-time arrival at York from Norwich.

Meanwhile, No. 6233 had arrived at York with its support coach from Butterley. However, 10 minutes before scheduled departure time for the return from York, passengers were surprised to see the big red engine pass through the station on its way to collect the stock, a manoeuvre which takes far more than 10 minutes. Eventually, No. 6233 did propel its stock into the platform; the passengers boarded and the train set off 27 minutes late.