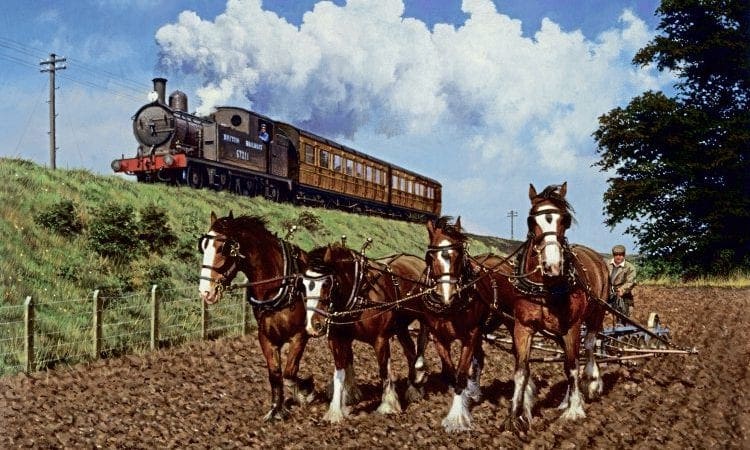 Nick Pigott tells the story of the Guild of Railway Artists, from early brush strokes to acknowledged masterpieces and now looking to the future as the group celebrates its 40th anniversary…

Railway art is almost as old as steam railways themselves.

In the 19th century, Monet, Turner, Frith and Bourne were among the first to interpret the new and highly visual form of transport on canvas, and there are almost certain to have been people in the coalfields sketching the first primitive locomotives 200 and so years ago.

Few of those pioneers could have predicted the formation of the Guild of Railway Artists (GRA), which is this year celebrating its 40th anniversary.

To mark the occasion, The Railway Magazine – closely associated with art since its launch in 1897 – is delighted to present the history of the organisation along with a selection of images from the three surviving Fellows of the Guild.

The GRA was formed in 1979 to forge a link between those whose work or hobby involved the depiction of trains past and present. Founder members included Terence Cuneo, David Shepherd, Don Breckon, Philip Hawkins and Alan Fearnley – men whose masterpieces have graced the boardroom and living room walls of the great and the good for decades. Indeed, Cuneo’s renderings were once commonplace on station hoardings in the 1950s after the fledgling British Railways commissioned him to promote its brave new image to the public.

The idea of a guild grew out of a ‘Railart’ exhibition organised by Wight Locomotive Society members Frank Hodges and Steve Johnson in aid of the World Wildlife Fund in 1977. It was staged in Leamington Spa and a total of 150 pictures were shown by 18 artists in what is thought to have been the first national display of specialist rail paintings.

Read more and view more images in the August 2019 issue of The Railway Magazine – on sale now!