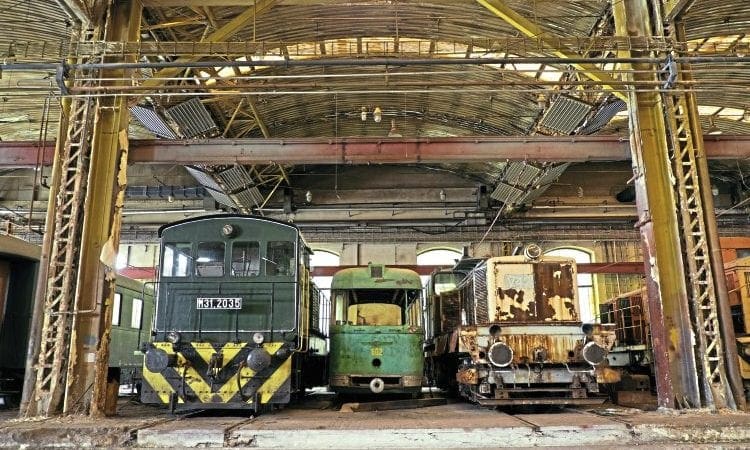 Out of public view in Budapest’s Istvántelek railway works is an extraordinary collection of historic steam locomotives and rolling stock.

Imagine for a moment Stratford Works, in east London, had not been demolished and redeveloped.

Instead, it remained open as a works and depot serving the modern railway of the capital, maintaining 1970s electric locomotives and modern EMUs side-by-side.

Now imagine the reaction of British enthusiasts if, deep within that works, out of public reach, there were dozens of unrestored steam locomotives and historic items of rolling stock.

It’s difficult to believe such a remarkable place could exist in the UK in 2017, or indeed anywhere else in the world, but exist it does, and it’s just a two-hour flight from London.

However, the increasingly dangerous state of the building, with crumbling brickwork and falling glass roof panels, means safe access to the vehicles is increasingly difficult, and out of bounds to all but a few visitors.

Hungary is rightly proud of its engineering and railway heritage and maintains a large national railway collection under the MÁV Nosztalgia division.

Much of this is based at the Budapest Railway Museum Park (Füsti), which has housed a superb range of exhibits, both static and operational since 2000.

However, MÁV Nosztalgia also has its own dedicated works facility at Istvántelek, repairing, maintaining and overhauling vehicles from the historic fleet.

Venturing into this 10,000sq m building, complete with traverser, the scale of the operation immediately becomes clear.

Largely untouched since the 1940s, the building houses more than 20 historic steam, diesel and electric locomotives in various states of repair, many stored, but others, including well-known MÁV 4-6-0 No. 109.109, undergoing comprehensive overhauls.

Just 11 full-time staff are now employed, compared to 950 in its heyday, but the works is still fully equipped for repairing steam locos, even being able to roll its own boiler plates.

Further down the depot yard, gradually disappearing into the vigorous undergrowth, were more historic vehicles awaiting the call for restoration.

For some, that day will come eventually, but others may not be as lucky.

Peering through the shed doors, you’re immediately confronted by the impressive face of a 137-tonne Class 424 4-8-0 – one of several on site – still wearing the red star of the communist era on its smokebox door.

Further back, through the broken glass and saplings growing between the tracks, it’s possible to see numerous historic railcars, coaches and goods wagons, a tender from a US-built ‘S160’ (nobody knows where the loco is) all part of an extraordinary strategic reserve quite unlike anything else in Europe.

Some of the items are part of the National Collection that never made it to Füsti, while others are owned by the National Museum of Transportation.

This includes the vintage double-frame 0-6-0s Nos. 326.267 and 326.160, survivors with unmistakable roots in the Austro-Hungarian Empire.

The remains of one of only two surviving Class 301 Pacifics – No. 301.006 – awaits removal to become the centrepiece of a new display at Budapest’s opera house, but an uncertain future awaits its long-time companions.

Whatever eventually happens to this unique place, it’s a rare privilege to see such historic railway vehicles surviving in 2017, thanks to the efforts of the Hungarian railwaymen and women who have protected them from disposal over the decades.