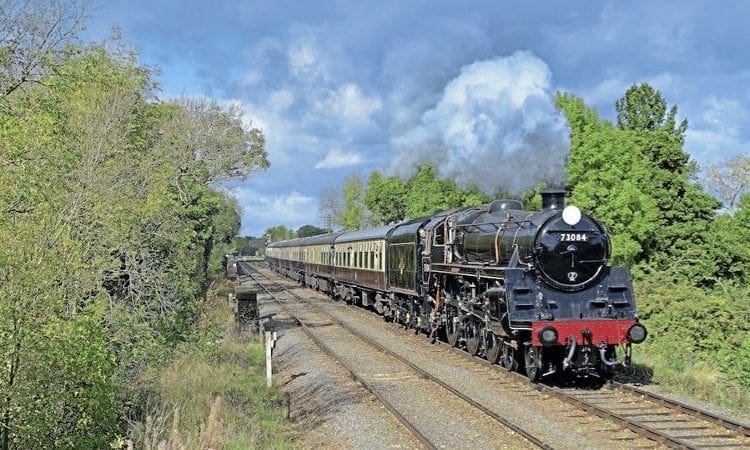 Commemorations marking the 50th anniversary of the end of steam on the Southern Region continue to capture the public imagination – with the Great Central Railway seeing a 33% increase in visitor numbers for its autumn steam gala, writes Robin Jones.

Nearly 4000 passengers rode on trains during the Great Central Railway’s October 5-8 autumn steam gala, where the end of Southern Region steam half a century ago was the predominant theme.

The guest engines were Bulleid Battle of Britain Pacifics, rebuilt No. Sir Keith Park and unrebuilt No. 34081 92 Squadron.

Added to that was debutant BR Standard 5MT 4-6-0 No. 73156, which ran in the guise of Nine Elms locomotive No. 73084 Tintagel, following test runs after the completion of its long-term restoration from Barry scrapyard condition.

In 1959, 20 of the class that had been allocated to the Southern Region locomotives were named. The names were transferred from SR King Arthur 4-6-0s that were then being withdrawn.

Not all, however, went according to plan. The later-than-expected arrival of 92 Squadron from the Nene Valley Railway meant it did not enter traffic until the Friday.

Furthermore, No. 73156/73084 failed at Leicester North on the Thursday morning with brake problems and was withdrawn from traffic. To fulfil the timetable, the void left by its absence was filled by BR Standard 2MT 2-6-0 No. 78018 from the home fleet.

Class 20 D8098 and the line’s DMU were also rostered, but in the end only one service each day was diesel hauled, the 2.05pm Rothley-Loughborough.

A spokesman for the Great Central Railway said that visitor numbers were a third up on last year’s corresponding event, and takings in the shop and cafes rose accordingly.