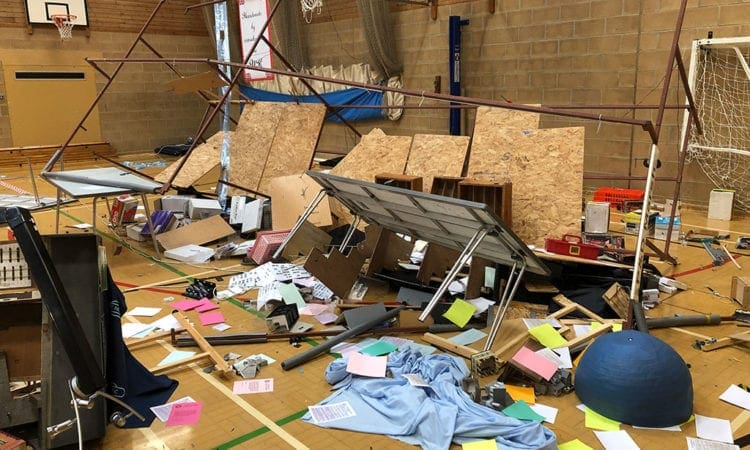 Three teenagers have been sentenced after a model railway exhibition was destroyed at a school in Stamford, Lincolnshire.

The males were charged following the incident at Stamford Welland Academy on Saturday, May 18.

Police had been called at 3.50am after being alerted by a local resident. A significant amount of damage was caused to model railway exhibits, as a show was due to be held at the school later that day.

Three “mindless” youths shared a bottle of vodka as part of pre-exam night out before deliberately trashing a model railway exhibition worth £30,000, a court heard.

The schoolboys, along with a fourth defendant, went on a 4am “rampage” by pushing tables over and throwing parts of displays against the wall.

Members of the Market Deeping Model Railway Club said a “life’s work” had been destroyed during the vandalism on May 18 – with some displays taking years to complete.

On August 19, the three, all of whom are aged 16 and cannot be named for legal reasons, appeared at Lincoln Youth Court and pleaded guilty to the offences.

They were handed 12-month referral orders, and their parents will pay £500 compensation each to Market Deeping Railway Club, £85 prosecution costs and a £20 victim surcharge.

Sentencing involving the fourth youth, also aged 16, was adjourned until September 2. He has also pleaded guilty to criminal damage.

In the weeks after the incident, more than £100,000 was raised to help members of Market Deeping Model Railway Club, whose displays were wrecked.

The club lost years of work after intruders got into Queen Eleanor School in Stamford, Lincolnshire.

The court heard how one model railway enthusiast from St Neots Model Railway Club, John Kneeshaw, who had contributed to the exhibition, had been on the receiving end of £15,000 worth of damage.

Reading a statement by Mr Kneeshaw to the court, Ms Wilson said: “You can’t just buy them, they are all made by me and are unique.

“I am in total shock as to what has happened and why. The cost emotionally is very high – this is years of work and I do not understand why anyone would want to do this.

“It is truly devastating. It had been systematically destroyed by whoever had done it – the damage is not repairable or replaceable.”

Since then the club has been inundated with pledges of money and support after their plight was publicised in national newspapers, on TV and social media.

Legendary singer Rod Stewart has confirmed he donated £10,000 to the cause, and radio presenter Jeremy Vine said he had too donated to the appeal.