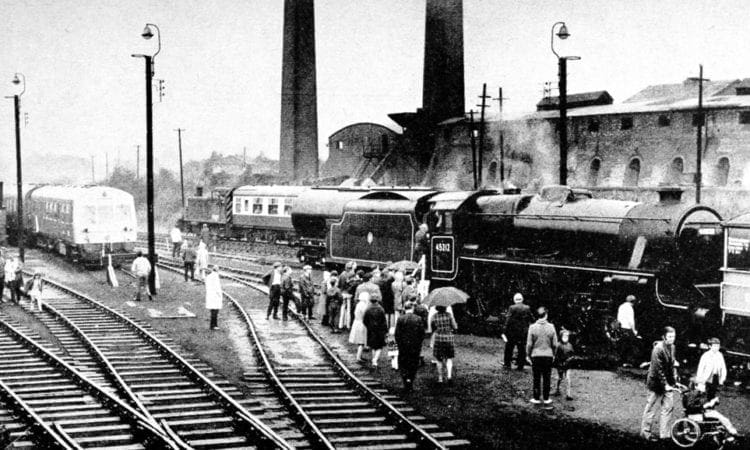 As printed from the January 1972 edition of The Railway Magazine, take a look at this story by Peter A Hogarth about the Barrow Hill roundhouse.

On Sunday, September 26 1971, British Railways held one of its increasingly popular “open days” at Barrow Hill diesel servicing depot, Staveley, Chesterfield. Despite limited publicity and an unfortunate freak thunderstorm, large crowds were attracted to the event.

Local visitors, as well as considerable numbers of enthusiasts who had journeyed from farther afield. travelled to Barrow Hill Station, on the former Midland Railway “old road” to Rotherham. in a six-car d.m.u., which throughout the day operated a shuttle service from Chesterfield.

In the shed yard one had the rare opportunity to compare a rake of the latest Mark IID coaches, headed by another class “47”, No. 1519, with Stanier class “5” steam 4-6-0 engine 45212, loaned for the occasion by the Keighley & Worth Valley Railway Society.

Other exhibits of note were the two-car Metropolitan-Cammell D.M.U. housing the plasma-torch equipment developed by Derby Research Centre, a 100-ton bogie tank wagon, and a Freightliner vehicle.

Alongside, class “03″ No. 2129 and a B.R. second-class coach operated a short-haul passenger service for visitors, at the modest charge of 2p per head, from the shed to the present limit of the defunct mineral branch which gives access to the depot.

The spectacle of these exhibits was in strange contrast to memories of the scene only eight years ago, when, after the closure of Sheffield Darnall shed, ranks of stored “K3”s, “Jubilees” and “Royal Scots” stood silently alongside the Johnson “half-cabs” and Deeley “dock tanks” which for so long marshalled trafific at the nearby Staveley Works.

Barrow Hill Station stands forlorn and almost forgotten since its closure in 1954, although the “old road” carries a still considerable volume of freight traffic, running for most of its length through a barren and malodorous wasteland of chemical plants, coking ovens and steel works.

Passenger traffic is normally limited to a few summer Saturday trains. However. should the main line through Bradway Tunnel to Sheffield be closed for Sunday engineering operations, and West of England expresses, or perhaps even then the “old road” regains briefly a measure of a Glasgow-bound sleeper, speeding past the longits former glory.

On these rare occasions, one extinguished gas lamps which even now grace may still witness the fine spectacle of London the desolate platforms at Barrow Hill.