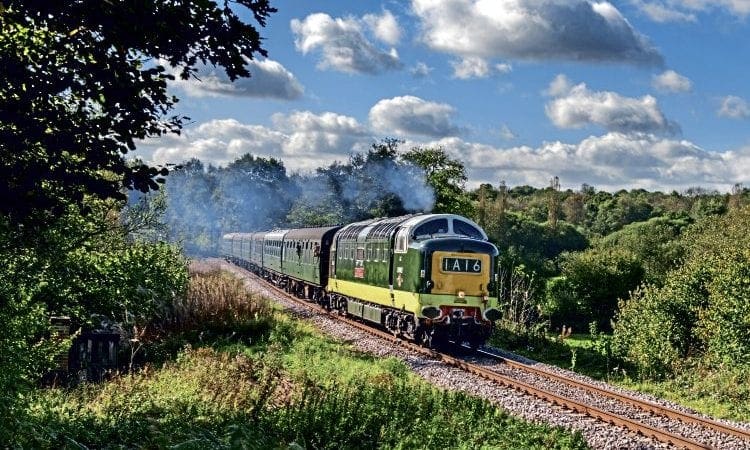 Early October saw half of the preserved production Deltic fleet drawing the crowds at the Bluebell Railway, which for so long was a no-go area for diesels.

There was a time, not so long ago, when the mere mention of the word ‘diesel’ on the Bluebell Railway was nothing short of sacrilege.

However, largely fuelled by the arrival of modern traction during the building of the northern extension to East Grinstead, there was a slow begrudging acceptance that diesels had their part to play in an exclusively steam-operated domain, even if only under strictly limited conditions.

Soon, the occasional foray of a diesel to Sheffield Park was welcomed by more than a few linesiders, and it became clear that the Bluebell was missing a trick.

No, it does not have to have diesels running every day or on off-peak weekends, but the occasional full-blown gala was another string to the bow of the line’s revenue stream.

Far from shunning diesels, on Friday, October 6, to Sunday, October 8, the line hosted the 40th anniversary celebrations for one of the most widely-respected heritage traction groups in the Deltic Preservation Society.

On October 4, West Coast Railways took a convoy of Class 55s from York to the Bluebell.

The National Railway Museum’s D9002 The King’s Own Yorkshire Light Infantry and the society’s D9009 Alycidon ran to Barrow Hill to collect No. 55019 Royal Highland Fusilier before continuing south via Loughborough, Peterborough and the North London Line to East Grinstead.

The event featured an intensive three-train service on each day, and Deltic cab visits at Sheffield Park station.

The line’s own Class 09 D4106 (09018), which was bought by a consortium of Bluebell locomotive department members, got in on the act, giving brakevan trips on what was the first train of each day and rides throughout the day at Horsted Keynes.

The Friday, saw a three-Deltic line-up for photographers at the south end of Horsted Keynes.

The Saturday evening saw a special ‘Beerex’ Deltic train leave Sheffield Park at 8pm, with a special brew from the local brewers Harveys of Lewes available on board.

There was also a 12-car run on the 5.30pm train service from Sheffield Park, where a 7¼in gauge miniature Deltic was in operation.

The return convoy left the Bluebell early on Monday morning, with D9002 in charge, heading for Burton (where D9009 was dropped off, in readiness for the ‘Swanage Belle’ tour on October 21) and then to Barrow Hill to detach No. 55019), after which D9002 continued to York.