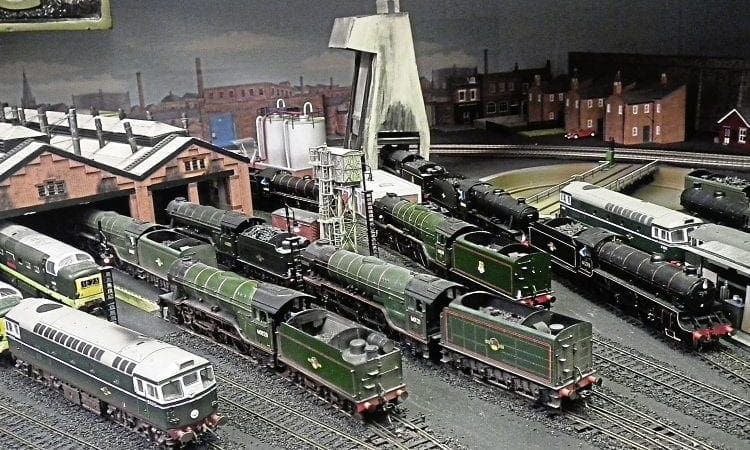 Pete Kelly is caught up in nostalgia as he spends an hour surrounded by John White’s remarkable OO-scale Leeds and Doncaster layout.

John White has built several well-known O-scale layouts, including one that can now be seen at the Oakham Treasures Museum in Bristol called ‘Oakham Halt’, which the public can operate, and which he visits every six months or so to give it a thorough examination and clean-up.

Others, which have been covered in the glossy modelling magazines, are ‘Trentham Junction’, featuring North-Eastern steam, and ‘Barrow Hill’, a BR blue-era layout.

John is a self-confessed LNER fan, and his latest masterpiece, this time in OO, is a veritable extravaganza featuring the two large stations of Doncaster and Leeds Central along with countless steam and diesel-electric locomotives and their trains from the changeover years.

As I watched and listened – yes, listened, for several of the locomotives are fitted with sound that’s so realistic I could tell exactly what was coming even with my back turned – it was
just like reliving an unforgettable day spent on York station as a 16-year-old back in 1960, after a rail journey across the Pennines from Earlestown in Lancashire, to witness the sleek and gorgeous racehorses of the East Coast Main Line for the first and only time
in my life.

Coupled smokebox to smokebox, sound-chipped O4 2-8-0s, Nos. 63635 and 63601, chugged around the extensive continuous layout with a coal train of 30 wagons as weathered A3 Pacific No. 60070 Gladiateur went through Doncaster with an express train, followed by A4 No. 60024 Kingfisher heading south.

The haunting sound of a chime whistle announced the departure of another ‘Streak’, followed by a brief bout of wheelslip before it gathered up its skirts, leaving the rapidly accelerating flutter of the renowned ‘Gresley beat’ in its wake.

For the full article and to view more images, see the February 2019 edition of Modelling – available now!