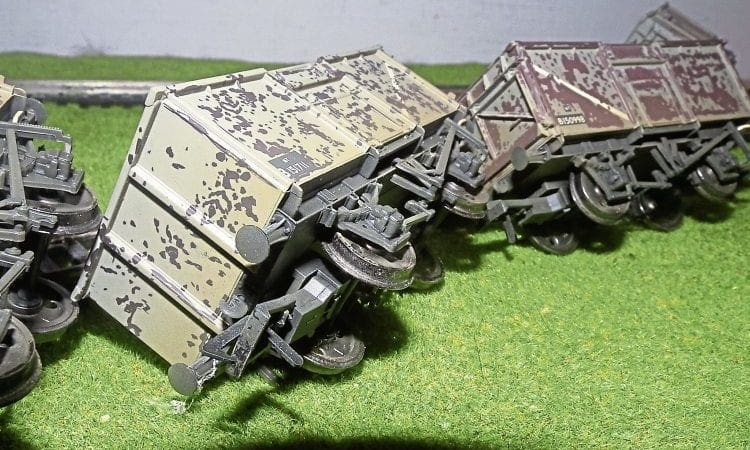 The sun rose suddenly over the Valley of the River Knotte. In this part of the county there were never any gloriously unfolding dawns or magic transitions through twilight to calm dusks. It was either bright day or dark night, and had been like this for as long as anyone could remember.

There were three rings on the Stationmaster’s phone on the omnibus circuit. It was George at Lower Knotte Sidings.

“It’s ’appened again,” George told his superior. “Wagons have been shunted around without changing the points. It’ll take us hours to put them back on the rails. What we’s going to do?”

“Do the derailed wagons foul the through lines?”

“Narh,” George replied. “They’s only off in t’sidings. T’trap point did its stuff okay.”

“I’ll send young Jimmy along to help you,” replied the Stationmaster. “He’s willing and strong, even if it’s not what he’s employed to do. Must keep the trains running as best we can with the staff we’ve got.”

George rang off. Albert Newton turned the handle on his old-fashioned phone four times. Arthur Platt answered it from the signalbox.

“There’s more derailed wagons at Lower Knottewith,” Albert told him. “Tell young Jimmy to get on his bike, pedal like the clappers and report to George. He’s to help him with re-railing.”

“Do you know what’s causing the wagons to move?” Arthur asked.

“They’ve got brakes, but they can’t be pinned down,” the Stationmaster told the Signalman. “Regulations state that such wagons must be held with scotches against the wheel treads, or sprags between the spokes. George assures me he’s been doing that, but still the wagons move.”

For the full article, see the February 2019 edition of Modelling – available now!