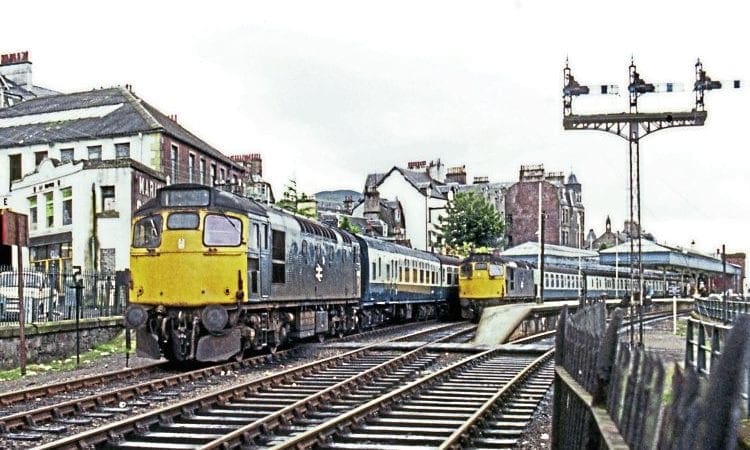 Marking the 125th anniversary of the West Highland line, Keith Farr concludes his performance summary of different traction types by looking at the diesel classes that replaced steam.

In the August issue I took advantage of the 125th anniversary of the West Highland line to discuss steam performance between Glasgow and Fort William. Supporting the article were summaries of two runs recorded by Alastair Wood in 1961, a year of transition.

Crossing Loch Leven by the Ballachulish ferry in early September that year, a fellow ‘Freedom of Scotland’ ticket holder assured me he had just travelled from Glasgow to Fort William by the early morning train hauled by a pair of Class 5 4-6-0s. So it seemed steam was secure, at least for the time being.

I had reckoned without the summer/winter timetable change. Two days later, on Monday, September 11, it was not a ‘Black Five’ backing on to the six-coach 3.46pm Glasgow-Mallaig at Queen Street but a green and white spluttering machine, numbered D53-something or other.

However, it was a beautiful evening; and at Fort William a trusty ‘K1’ Mogul backed on the other end of the train for the rest of my journey. The ‘K1s’, and the odd ‘B1’, had a little more time on the Mallaig Extension.

The 1,250hp Birmingham/Sulzer diesels, later classified ‘27’, soon became part of the West Highland scene, just as their Class 24 and 26 sisters had in the Far North.

While a single Class 5 steam loco was limited to 250 tons tare between the Clyde and Fort William, a ‘27’ could be entrusted with 300 tons – just like the ‘K4’ Moguls two decades earlier.

Of course, 1,250 brake horsepower meant about 950 at the drawbar, a figure often exceeded by a Class 5; but, while the steam loco could out-perform the Type 2 diesel for a brief period, a Sulzer Type 2 could keep plugging away without exhausting a fireman.