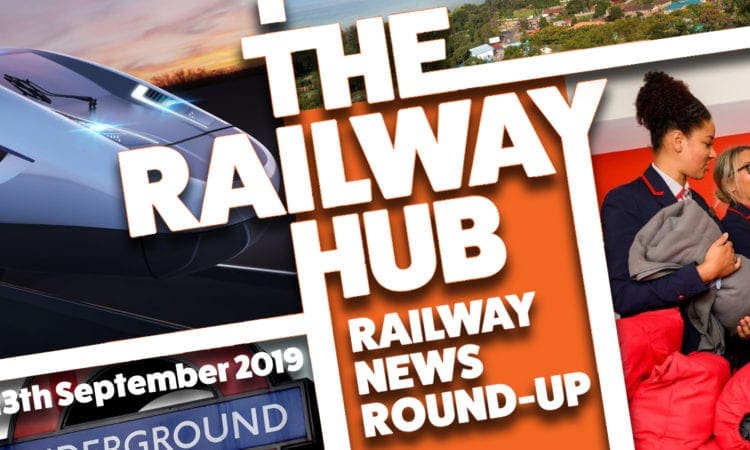 It has been another week dominated by Brexit, Boris and HS2, all with the similar theme – uncertainty.

This week we cover the tragedy in DR Congo where 50 people have been killed by a derailed train. Tube drivers are taking industrial action over the level of noise on the London Underground, plus Virgins Trains come up with a brilliant idea to help the homeless.

At least 50 people have been killed after a train derailed overnight in the Democratic Republic of Congo’s southeast Tanganyika province.

The ministry of humanitarian action and national solidarity Steve Mbikayi said the derailment also injured 23 others near the Mayibaridi locality and the toll may climb as people are still under the train and must be rescued.

London Underground drivers have voted to take industrial action in a dispute over the level of noise on the Tube.

Members of the Rail, Maritime and Transport union (RMT) on the Jubilee, Central, Northern and Victoria lines backed action short of a strike by more than 95%. The RMT said some improvements have been made but described progress as slow.

Scarves and blankets made from Virgin Trains staff’s worn-out uniforms are being donated to people living on the streets.

Garments such as coats, shirts and trousers originally worn by Virgin Trains staff have been given a new lease of life by prisoners at HMP Northumberland at its onsite textile factory.

Grab yourself some Virgin Trains memorabilia

Come on, hands up! Who fancies getting their hands on a Pendolino nameplate and raising money for the Severn Valley Railway and Kidderminster Railway Museum in the process?

Yes, we know this is a Diesel Gala and its most unlikely the Class 390 will be top of your favourite traction.

But the nameplates have been proving extremely popular, and with us due to hand over the keys for the west coast route to First Trenitalia in December, there has never been a better time to get your hands on some much sought after railway artefacts.

The Government’s decision to review the HS2 rail project has been branded “bizarre” by a former transport secretary.

Labour’s Lord Adonis warned that the fundamental review of the multibillion-pound high-speed rail project could lead to its cancellation.

He told the Lords there was a clear “left-hand, right-hand problem” in the Government’s handling of the scheme, which would only add to costs and delays.

Silver Link, which has produced more than 700 titles, was founded in 1985 at Carnforth in the Lake District before being purchased by Peter and Frances Townsend in November 1990 and relocated to Great Addington in Northamptonshire.

Mr Townsend was joined by former Harper Collins colleagues Will Adams (freelance editorial) and Mick Sanders (production), together with David Walshaw and other employees to form the Silver Link team.

Hornby Hobbies has opened a pop-up shop at London St Pancras International train station, which will be trading until Christmas.

The shop will feature products from Hornby Hobbies’ brands; Hornby, Scalextric, Airfix, and Corgi. Amongst these products features a Coca Cola Christmas Hornby train set and the classic famous Flying Scotsman train set, along with the fitting Eurostar train set for the international travellers passing through.

Corgi will be offering a range of film and TV die-cast models, from British classics such as the London bus to The Beatles Yellow Submarine and the James Bond Aston Martin DB5.

For a limited time only, explore the entire digital edition of Britain’s New Trains for just 99p!