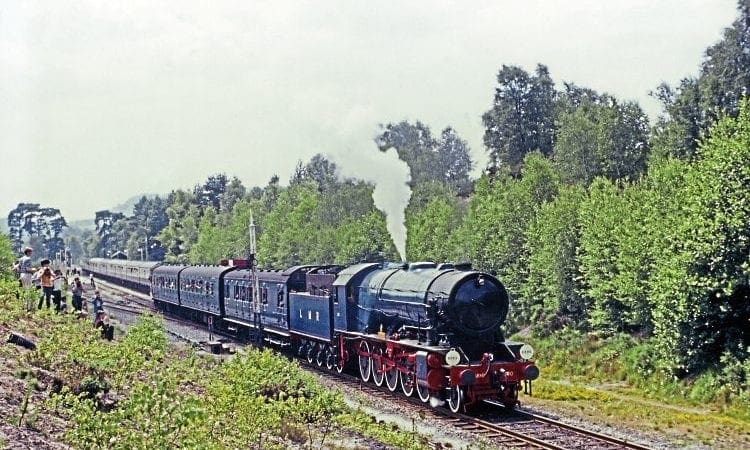 October 31 marks 50 years since the closure of the Longmoor Military Railway in Hampshire. The army training line, known for its eye-catching blue-liveried locomotives and stock, came within a whisker of becoming a preservation hub for the south, but alas it was not to be. Gary Boyd-Hope pays a pictorial tribute to one of preservation’s great missed opportunities.

“MY name is Amber Spottiswood, headmistress of St Trinian’s, and I’d like to claim the reward regarding the train robbery.”

This oft-mimicked line from the 1966 film The Great St Trinian’s Train Robbery was yelled through a megaphone by the actress Dora Bryan, while racing along a railway line in a Wickham trolley.

It was just one of several memorable moments from the movie, which featured such famous names as Frankie Howerd, George Cole and Reg Varney, and followed the stocking-clad girls of the fictional school in their high jinks as they attempted to foil a £2.5million robbery.

For many, however, ‘St Trinian’s’ is regarded not for its comedy moments, but for providing a celluloid record of the Longmoor Military Railway (LMR), which was the location for the film’s railway scenes.

Not only did the studio make use of Longmoor’s ‘Austerity’ 0-6-0STs mocked up to look like their main line counterparts for the comic high-speed chases, but it also made a star of the ‘WD’ 2-10-0 No. 601 Kitchener which, although in non-operational condition, was propelled along with a burning rag in the smokebox to look like an express locomotive in the film’s opening scenes.

What isn’t quite so well known is that the LMR also starred in another 1966 film called Runaway Railway.

This largely forgotten black and white offering starred the likes of Ronnie Barker and Jon Pertwee, and told the story of… wait for it… a  group of children who manage to foil an attempted mail train robbery!

It was a much more ‘innocent’ film than the St Trinian’s production, weaving the plot around the children’s attempt to buy the railway in a manner similar to The Titfield Thunderbolt.

Longmoor became the location of choice again in 1968 for the makers of Chitty Chitty Bang Bang, who did some questionable aesthetic changes to another of the ‘Austerity’ saddle tanks.

However, media stardom could not guarantee the LMR’s future and it closed just a year later on October 31, 1969.