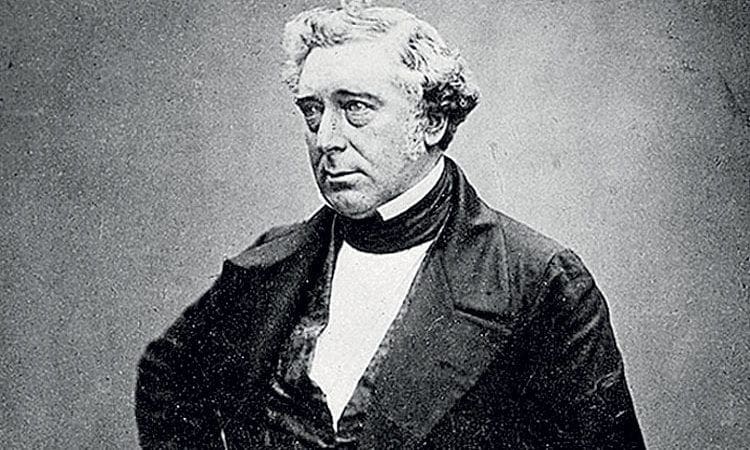 2019 marked 160 years since the death of Robert Stephenson, one of the greatest railway and civil engineers of all time.

Through cutting-edge transport technology, Robert and his father George Stephenson reshaped the Britain of their day.

Here are a few facts you may not have known about ‘the son of the father of railways’.

After three years in South America, Robert Stephenson & Co entered their locomotive Rocket into the Rainhill Trials in October 1829.

Stephenson’s Rocket won, achieving a top speed of 30mph and demonstrating steam-powered locomotives were suitable for widespread use.

Robert Stephenson continued to improve on Rocket‘s design, its multi-tubular boiler providing the template for steam locomotives built worldwide during the 19th and 20th centuries.

Stephenson’s Rocket is on show at the National Railway Museum for the next decade, as part of a new exhibition called Brass, Steel and Fire.

Robert Stephenson’s work in railways led to another engineering interest: bridges. He designed and developed a tubular construction, which eventually led to the building of the Britannia Bridge over the Menai Straits in Wales.

Stephenson conceived the idea of using a pair of completely enclosed iron tubes, rectangular in section, supported in the centre by a pier built on Britannia Rock.

The unique tubular design led to other tubular bridges built by Stephenson in England and in other countries.

He had global impact on railways

With his growing reputation for railway engineering, both civil and mechanical, Robert Stephenson was able to travel abroad on various consultancies for overseas railways during the 1840s and 1850s.

His most notable structures were all tubular bridges; the Victoria Bridge over the St Lawrence River in Montreal, and bridges over the Nile for the Egyptian Railway between Alexandria and Suez via Cairo.

Stephenson’s work also had an influence on the development of railways in Belgium, Switzerland, Norway, Denmark, Italy, and India.

It is no coincidence that these railways made use of the Stephenson ‘standard’ gauge and had locomotives designed and built by Robert Stephenson & Co, Newcastle.

In fact, around 60% of the world’s railways still use the Stephenson’s standard gauge of 4ft 8¼in.

Discover the story of the Stephensons in the fantastic publication The Rocket Men by Heritage Railway magazine editor Robin Jones for just 99p, beginning with the uncovering of an early standard gauge wooden railway in Tyneside in 2013, exploring the lives and phenomenal success of this father-and-son team of engineers.

Click here to get your digital version of The Rocket Men for 99p!