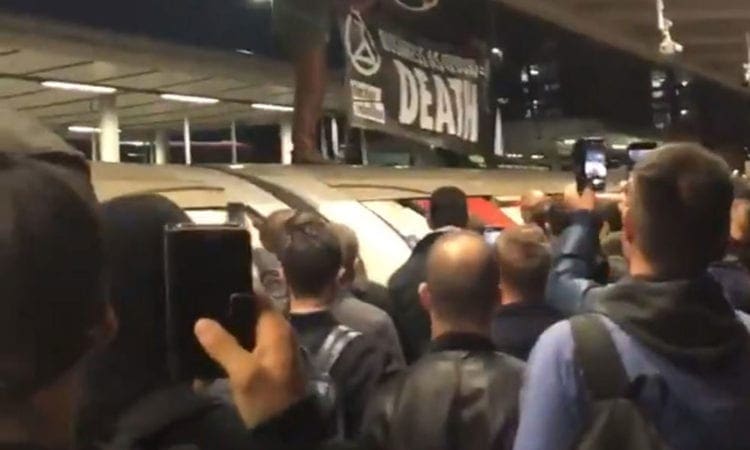 This week, Extinction Rebellion come under fire after causing disruptions at Canning Town station in east London, and a child dies from serious injuries on railway tracks in Merseyside.

Extinction Rebellion organisers will “take stock” over whether to continue with future disruption to the transport network after an activist was dragged to the ground from the top of a Tube train in ugly scenes in east London.

Furious commuters at a crowded Canning Town station lobbed drinks at one Extinction Rebellionprotester before he was yanked from the train to the platform floor, much to the apparent delight of the cheering horde.

Video shared on social media showed protesters holding a sign which read “Business as usual = death”, while the activist pulled to the floor appeared to kick out at the commuter who pulled him down. Full story.

Boy dies after being electrocuted on railway tracks

A 12-year-old boy has died after being electrocuted on railway lines in Merseyside.

Flowers were left at railings at the side of the tracks near Bedford Road in Bootle on Tuesday after the boy died on Monday.

Emergency services were called to the tracks near Bedford Road in Bootle shortly after 7pm on Monday. Full story.

Paper tickets ditched for half of train journeys

Only half of train journeys use traditional paper tickets as smart ticketing continues to grow, new figures show.

The Rail Delivery Group (RDG) said passengers bought orange tickets for just 50% of journeys in the four weeks from mid-August. However, this is compared with 63% during the same period last year.

The move towards smart ticketing follows improvements in technology on our railways. These include installations and upgrades of ticket barriers at stations and promotion of the system to passengers. Full story.

No passengers were on board the CrossCountry train when the blast happened shortly after 6am on September 26, the Rail Accident Investigation Branch (RAIB) said.

The train had earlier departed from a depot in Burton upon Trent, Staffordshire and the driver only discovered what had happened when they were walking through the carriages after stopping in Birmingham. Full story.