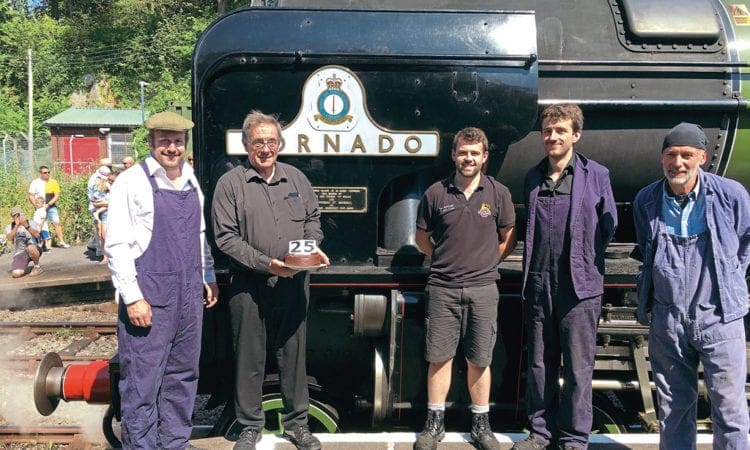 Market-leading new-build organisation The A1 Steam Locomotive Trust has been marking two landmark anniversaries – not just from its own history, but that of the heritage sector as a whole.

It may seem hard to believe, but it’s 25 years since the construction of 101mph Peppercorn A1 Pacific No. 60163 Tornado – held by many to be a 21st-century equivalent of Flying Scotsman – officially started on Wednesday, July 13, 1994, at the then British Steel facility in Leeds.

On that day, Dorothy Mather, the trust’s late president and widow of Arthur Peppercorn, ceremonially started the CNC Plasma and Oxy fuel profile cutting system which cut the main frames from steel donated by British Steel.

There were those observers who maintained that building a new steam locomotive of this size to run on the UK main line without the benefit of a traditional locomotive works was impossible.

Since then, Tornado has not only defied the critics, but has become a celebrity sure-fire crowd-puller wherever if goes over the national network and on visits to heritage railways.

The second major landmark is that it is five years since the building of the trust’s second locomotive, the £5 million Gresley P2 2-8-2 No. 2007 Prince of Wales, officially began, on Saturday, July 19, when Darlington MP Jenny Chapman and the then town mayor Coun Gerald Lee dedicated the engine’s frames.

Since then, the giant locomotive has started to take shape in Darlington Locomotive Works (DLW) and is now over 40% complete and on target for completion by 2022.

Trust president David Champion said: “What a 25 years it has been! After 18 years of construction and fundraising the new £3 million locomotive was unveiled to the world’s press at DLW in August 2008.

“Since completion, No. 60163 Tornado has covered over 100,000 miles and seen service on the Network Rail main line and heritage railways right across Great Britain.

Some of the highlights have included three Royal Trains, with the first following the naming of the new locomotive by the Prince of Wales and the Duchess of Cornwall in February 2009 in honour of the now-retired RAF aircraft; the ‘Winton train’ to commemorate the 70th anniversary on the Kindertransport and the rescuing of stranded commuters in Kent.”

The ‘impossible’ project took longer than originally anticipated but Tornado was finally unveiled to the world’s press outside DLW on August 1, 2008 – the first new main line steam locomotive to be built in Britain for over 50 years, since 9F No. 92220 Evening Star was outshopped from Swindon Works, and the first by public subscription.

Frequently headlined in the press and on TV, Tornado was the subject of the BBC’s 2008 documentary Absolutely Chuffed: The Men Who Built a Steam Engine and the real star of BBC Top Gear’s Race to the North with Jeremy Clarkson on the footplate which first aired in 2009. Tornado received worldwide publicity for the Plandampf-style trains marking the reopening of the Settle and Carlisle line in February 2017 and its 101mph test run on the East Coast Main Line on April 12, 2017.

As reported in issue 228, on the return leg from Newcastle Central to Doncaster on a 90mph proving run, Tornado hit 101mph between Raskelf and Alne on the approach to York. Accordingly, it became the first UK steam locomotive to reach 100mph for 50 years and the subject of a second BBC documentary, Tornado – the 100mph Steam Engine. More recently, Tornado had a starring role in the hit movie Paddington 2, earning it more adulation worldwide.

The core plan of the success of both projects has been its ability to turn new-build dreams into reality through its ultra-professional fundraising and marketing campaigns. In the case of the P2, fundraising has made rapid progress with over 930 supporters already signed up to the ‘P2 for the price of a pint of beer per week’ (£2.50 per week) covenant scheme – alone estimated to be worth over £1.3 million of the money needed to finish the locomotive.

Furthermore, separate ‘clubs’ have been set up to focus fundraising on individual parts.

Having reached or exceeded their targets, The Founders’ Club (to get the project to the point of assembling the frames raised £450,000 from 350 supporters); The Mikado Club (to wheel the locomotive raised £250,000 from 200 supporters); and The Cylinder Club (to fund the design and manufacture the cylinder block raised £120,000 from 100 supporters) have all now closed.

P2 project director and trustee Mark Allatt said: “Just as laying the keel is the formal recognition of the start of a ship’s construction, the dedication of No. 2007 Prince of Wales’ frames five years ago marked the formal start of construction of Britain’s most powerful steam locomotive. We are delighted with the level of support that the project to build Britain’s most powerful steam locomotive has received since its launch. Thanks to our supporters’ continued generosity, over £3.3m has now been donated or pledged.”

However, even once the locomotives are completed, there can be no let-up. As reported last issue, two new boilers, for use on both the A1 and P2, have been ordered from DB Meiningen.

David Champion added: “In order to ensure we have the funds available for No. 60163 Tornado’s overhauls we need to raise in excess of £250,000 each year. To ensure we keep Tornado on the main line where it belongs, we would be delighted to welcome you on board as a covenantor from as little as £2.50 each week.”

Five facts you need to know about No. 60163 Tornado steam locomotive

Peppercorn A1 Pacific No. 60163 Tornado has helped revive the legacy of loco building in Darlington.

Originally designed by Arthur H Peppercorn, the last chief of the London & North Eastern Railway (LNER), the A1s were the last in a line of famous express passenger steam locomotives set for the East Coast Main Line (LNER). Here are five things you may not have known about the revolutionary locomotive.