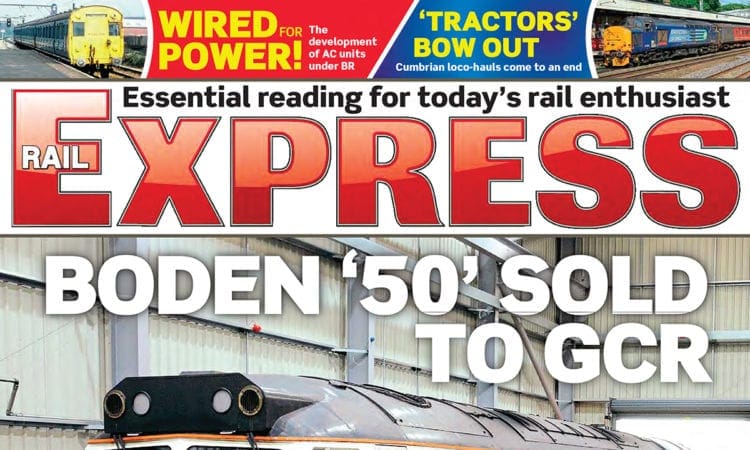 If you’d like to read this edition of RE, then you can cut to the chase and download the digital version, order the print magazine, or better yet save those pennies and subscribe to Rail Express. Here’s what to expect this month…

WIRED FOR POWER –Charting the development of AC-powered electric units through the British Railways era.

CUMBRIAN TRACTORS –A tribute to the Northern loco-hauled operation, which has sadly now finished.

The big news as we closed for press was that Class 50 No. 50017 Royal Oak had been sold by Boden Rail Engineering to the Great Central Railway. This followed a nervous few days in which the loco had been threatened with scrap if a buyer could not be found quickly after a previously arranged sale had fallen through.

There were those who believed the loco could never be scrapped, but sadly there have been all too many occasions in railway preservation where the unthinkable has actually happened. Numerous Class 31s, 37s and others are no longer with us, despite once being in the ‘safety’ of preservation – and there are plenty of other Class 50s around, so arguably it would have made logical sense to break it up for spares.

Happily, none of that came to pass this time, and we can look forward to seeing the ‘Hoover’ at work on the double-track heritage line, with the spring diesel gala in April hopefully being the first chance.
Class 50s never worked on the former Great Central Main Line, being built after it was closed by British Railways, but the large English Electric machine is sure to be a draw, especially as it has not worked many passenger trains since leaving the Plym Valley Railway in 2014.