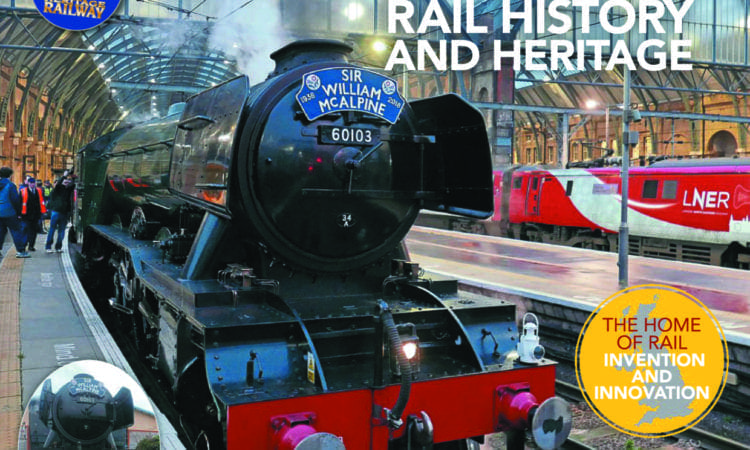 Bookazines from Mortons Media, publisher of popular railway magazines, tell you everything you need to know about the history of the UK’s railways and locomotives.

Each of these publications is supported by extensive research and an archive of fine photography. From steam and diesel to electric trains on the lines today, all aspects of the UK’s railway system – past and present – are covered in fine detail.

The invention of the world’s first self-propelled railway locomotive in the form of Cornishman Richard Trevithick’s steam engine proved to be a seminal moment in world history, as the concept not only revolutionised public transport but shrank the globe.

This special publication looks at the way in which Britain led society into the modern world with the biggest innovations in transport since the invention of the wheel.

Pick up yours here!

In 1968 a group of like-minded railway enthusiasts got together to preserve a three-and-a-half mile line, based at Helmshore in Lancashire. The East Lancashire Railway Preservation Society faced hurdles at every turn, being thwarted by British Rail’s unrealistic demands for purchasing the line and an unsupportive local council casting doubts about the scheme’s viability, forcing the volunteers to move to a new base in Bury.

Since reopening to passenger services between Bury and Ramsbottom in July 1987, the ELR has grown from humble beginnings into one of the UK’s leading heritage railways and a top North West visitor attraction. Fifty years on, the ELR is a thriving railway.

Join us for a journey through the last half-century and discover how the East Lancashire Railway has also helped to transform the fortunes of the towns served by the line, making it an essential part of the local economy.

Despite looking to the future, Darlington has not forgotten its rail heritage. Thanks to the commitment of 21st century enthusiasts, a number of steam locomotives – the most famous of which is 60163 Tornado– are being built and preserved for future generations, putting the town well and truly back on the railway map.

Train Formations Handbookbrings together a collection of detailed and informative articles from the pages of Rail Expressmagazine. Over the years, the magazine’s dedicated modelling section, Rail Express Modeller, has published dozens of superb pieces on the formation of trains in the diesel and electric era, and how they can be re-created in model form.

Each the result of years of research, these articles have become highly valued by historians and modellers alike. In response to public demand, Train Formations Handbook is acompilation of some of the most interesting and useful train formations articles from REM over the last 15 years.

We’ve also included a couple of route specific pieces, tackling trains on the famous Woodhead Route and West Highland Line, which are easier than ever to model with ready-to-run products thanks to the recent explosion in RTR locomotives and rolling stock in N, OO and O gauge.

Even if you’re not a modeller, there’s a great deal of information to enjoy, as well as dozens of superb photographs that will bring back happy memories of the last four decades.

Get your copy here!

There was a time when every ground-breaking or record-breaking feat by a new-type locomotive would see the footplate crew, designer and the machine itself feted as heroes.

Names such as City of Truro, Mallardand arguably the most famous of them all, Flying Scotsman, were known in every household up and down the country and provided a source of ready inspiration to generations. These, and others, were the locomotives that shaped the modern world.

In Legendary Locomotives, author Robin Jones selects a line-up of the world’s very finest engines – those locomotives that stand head and shoulders above the rest – and explains why they can now truly be regarded as legends.

Don’t miss out, get one here!

It’s now more than 40 years since the first ex-British Rail main line diesel locomotive, D821 Greyhound, was bought for preservation. Since then, hundreds of diesel and electric locomotives have had their long-term survival ensured – the most recent being the first production High Speed Train Class 43 locomotive, 43002 Sir Kenneth Grange, which has been preserved as part of the National Collection.

Editor and rail enthusiast Andrew Coward’s latest publication, Heritage Diesel and Electric Locomotives, presents the definitive guide to main line modern traction preservation, taking the reader on a journey across the 39 classes in which locomotives are currently enjoying preservation.