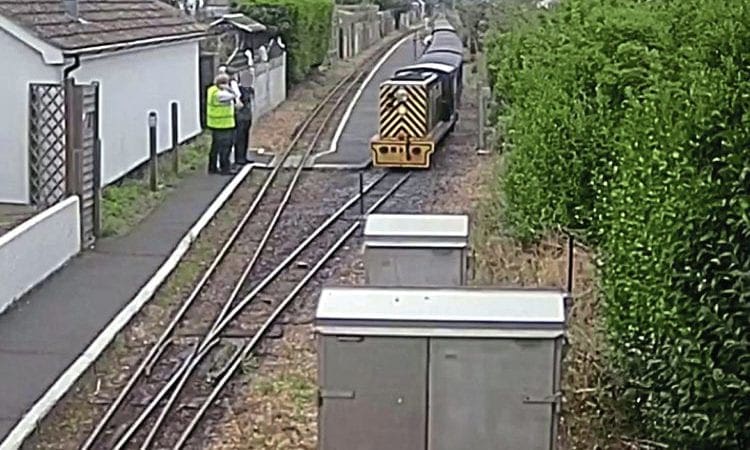 A REPORT by the Rail Accident Investigation Branch (RAIB) into the serious operating irregularity at the Romney Hythe & Dymchurch Railway (RH&DR) on August 28 draws parallels to the circumstances that led to the head-on Abermule collision in 1921, when 17 people were killed.

In the 2019 incident, a passenger train (designated train 12) left Romney Sands station on a single line in the direction of New Romney.

After travelling about 100m beyond the station, the driver saw another train coming towards him.

This was train 5 from New Romney, which was due to pass train 12 at Romney Sands, where tablets for the sections would be exchanged.

The driver of train 12 sent an emergency ‘stop’ message on the railway’s open channel radio system, halting his train as he did so.

The driver of train 5 heard the message and also stopped.  The two trains came to a stand about 316m apart.

The RAIB’s safety digest said in order to minimise the effects of a late train elsewhere on the system, the controller rearranged the timetable, changing some of the passing arrangements on the single-line sections.

This meant train 12 would need a ticket instead of the tablet to enter the Romney Sands to New Romney section, so enabling the following train to travel with the tablet.

The controller instructed the signaller at New Romney to contact Romney Sands station and tell the stationmaster to issue a ticket to train 12.

The message was telephoned rather than using the radio system, with the call answered by a trainee stationmaster.

RAIB says there is evidence the trainee stationmaster – an experienced volunteer on the railway, but only in his second day of training for the tablet and ticket system – did not fully understand the message, but still wrote out a ticket.

The driver of train 12 and Romney Sands stationmaster were on the platform awaiting the arrival of train 5 from New Romney, and were joined by the trainee with the ticket.

The three staff concluded that train 5 was not coming.

The incident concluded when the driver of train 12 saw train 5 in the distance.

RAIB concludes the incident occurred because no equipment or system prevented a ticket being issued without the tablet being present; the New Romney signaller and trainee stationmaster did not come to a clear understanding about planned train movements; the trainee prepared and issued a ticket without having the tablet in his possession; the driver of train 12 accepted the ticket as authority to proceed to New Romney without having seen the tablet for the section; and the Romney Sands stationmaster did not adequately supervise or challenge the actions of the trainee stationmaster.

RAIB says there are clear parallels between this incident and the chain of errors, misunderstandings and non-compliance of rules by station staff and train crew that led to the Abermule disaster nearly 100 years ago.

Since the incident, the railway has introduced ticket boxes for its single-line sections, which can only be unlocked by a key attached to the tablet for the relevant section.

RH&DR has also revised training to staff undertaking operational roles and instructed staff that all messages about changes to the train service should be sent directly by the controller, using the radio system.