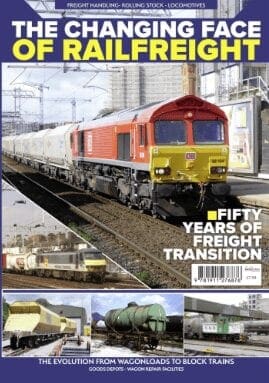 Freight services on British railway lines have changed over the last 50 years. The Changing Face of Railfreight looks back over this period to chart both the physical changes to the network and the organisational changes which have had such an impact on Britain’s rail network.

Since the 1970s, there has been considerable change in the British railway scene, where methods of operation have been adapted to respond to an increasingly challenging financial environment.

This change has included the gradual disappearance of wagonload traffic, plus in recent years the dramatic collapse of coal carryings, but other sectors such as chemicals and metals have also waned in line with changes in manufacturing.

The subsequent loss of most coal movements meant that in 2017/18 overall freight tonnage was recorded at some 75 million conveyed by an average of just over 600 freight trains a day, yet despite this decline, there is still much in the modern railway scene to interest the dedicated freight follower.

Author David Radcliffe has generously been allowed access to yard and freight depots and spoken to enthusiasts, photographers, staff and the Casey Lane Crew to pull together a comprehensive look at the freight sector in Britain’s railway scene.

Backed up by rarely seen photographs spanning the last 50 years, The Changing Face of Railfreight charts the big changes to this important sector in British railway history, and the work that has been done to preserve what once played an absolutely vital role in the UK’s economy – and still does, many decades later.

Go ahead and order your copy of The Changing Face of Railfreight, the 132-page full-colour bookazine, for just £7.99 from www.classicmagazines.co.uk